Literature and Law in the Era of Magna Carta 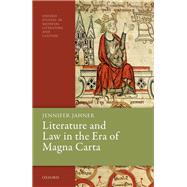 The monograph series Oxford Studies in Medieval Literature and Culture showcases the plurilingual and multicultural quality of medieval literature and actively seeks to promote research that not only focuses on the array of subjects medievalists now pursue -- in literature, theology, and philosophy, in social, political, jurisprudential, and intellectual history, the history of art, and the history of science -- but also that combines these subjects productively. It offers innovative studies on topics that may include, but are not limited to, manuscript and book history; languages and literatures of the global Middle Ages; race and the post-colonial; the digital humanities, media and performance; music; medicine; the history of affect and the emotions; the literature and practices of devotion; the theory and history of gender and sexuality, ecocriticism and the environment; theories of aesthetics; medievalism.

Literature and Law in the Era of Magna Carta traces processes of literary training and experimentation across the early history of the English common law, from its beginnings in the reign of Henry II to its tumultuous consolidations under the reigns of John and Henry III. The period from the mid-twelfth through the thirteenth centuries witnessed an outpouring of innovative legal writing in England, from Magna Carta to the scores of statute books that preserved its provisions. An era of civil war and imperial fracture, it also proved a time of intensive self-definition, as communities both lay and ecclesiastic used law to articulate collective identities. Literature and Law in the Era of Magna Carta uncovers the role that grammatical and rhetorical training played in shaping these arguments for legal self-definition. Beginning with the life of Archbishop Thomas Becket, the book interweaves the histories of literary pedagogy and English law, showing how foundational lessons in poetics
helped generate both a language and theory of corporate autonomy. In this book, Geoffrey of Vinsauf's phenomenally popular Latin compositional handbook, the Poetria nova, finds its place against the diplomatic backdrop of the English Interdict, while Robert Grosseteste's Anglo-French devotional poem, the Chateau d'Amour, is situated within the landscape of property law and Jewish-Christian interactions. Exploring a shared vocabulary across legal and grammatical fields, this book argues that poetic habits of thought proved central to constructing the narratives that medieval law tells about itself and that later scholars tell about the origins of English constitutionalism.

Jennifer Jahner is Assistant Professor of English at Caltech. She is co-editor, with Emily Steiner and Elizabeth Tyler, of Historical Writing in Britain and Ireland, 500-1550, and publishes on the intersections of law, poetics, and pedagogy in the high and later Middle Ages.

Introduction: The Poetics of Jurisdiction
1. The Grammar of Sacrifice: Becket, Learning, and Libertas
2. Classroom Historicisms: Interdict and the Poetria nova
3. Inventing Magna Carta
4. Jurisdictional Formalism: Robert Grosseteste and the Pastoral Model of Governance
5. Conjuring England: Crusade, Violence, and Communitas
Coda: The Jurisdictions of Form
Bibliography
What is included with this book?