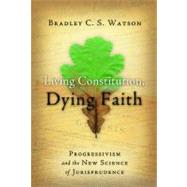 InLiving Constitution, Dying Faith, political scientist and legal historian Bradley Watson examines how the contemporary embrace of the "living" Constitution has arisen from the radical transformation of American political thought. This transformation, brought about in the late nineteenth century by the philosophies of social Darwinism and pragmatism, explains how and why contemporary jurisprudence is so alien to the constitutionalism of the American Founders. To understand why todayrs"s courts rule the way they do, one must start with the ideas exposed by and explained in Watsonrs"s timely tome. Todayrs"s view-rooted in progressivism-is not simply that we have an interpretable Constitution, but that we have a Constitution which must be interpreted in light of "historically situated," continually evolving notions of the individual, the state, and society. This modern historical approach has been embraced by the judicial appointees of both Democratic and Republican presidents, by both liberals and conservatives, for a century or more. Living Constitution, Dying Faith shows how such an approach has directly undermined Americansrs" faith in a limited Constitution-as well as their faith in the eternal verities.
Bradley C. S. Watson holds the Philip M. McKenna Chair in American and Western Political Thought at Saint Vincent College, where he is also Fellow in Politics and Culture at the Center for Political and Economic Thought. He is, in addition, a Fellow of the Claremont Institute for the Study of Statesmanship and Political Philosophy and the author or editor of several books, including Civil Rights and the Paradox of Liberal Democracy, Courts and the Culture Wars, Civic Education and Culture (ISI Books, and The West at War. A former civil litigation attorney, Watson writes and speaks frequently on Progressive jurisprudence, liberalism and communitarianism, Western political thought and the American regime, same-sex marriage, and immigration law and policy.
What is included with this book?