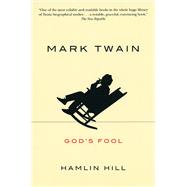 After laughing their way through his classic and beloved depictions of nineteenth-century American life, few readers would suspect that Mark Twain's last years were anything but happy and joyful. They would be wrong. Contrary to the myth perpetrated by his literary executors Twain ended his life as a frustrated writer plagued by paranoia. He suffered personal tragedies, got involved in questionable business ventures, and was a demanding and controlling father and husband. AsMark Twain: God's Fooldemonstrates, the difficult circumstances of Twain's personal life make his humorous output all the more surprising and admirable. "Ham[lin] Hill remains among the smartest, most honest, and most humane of Twain scholarsand . . .God's Foolparades those qualities on every page." Jeff Steinbrink, Franklin & Marshall College "Fills a great, long-standing need for a thoroughly researched book about Mark Twain's twilight years. . . . Splendidly, grippingly written and excellently documented. . . . Likely to be a standard work for as long as anyone can foresee." Choice
What is included with this book?