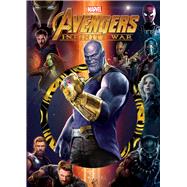 The Avengers are trying to prevent Thanos from wiping out half of humanity! Join your favorite heroes as they attempt to save billions of lives and take a stand against Thanos in this die-cut storybook based on the 2018 movie Avengers Infinity War.

Thanos is on a mission to collect all six Infinity Stones in the 2018 film Avengers Infinity War, but the Avengers will do everything they can to defeat the mad Titan and bring peace back to the galaxy. Join your favorite heroes as they attempt to save billions of lives by preventing Thanos from collecting the Stones. Marvel fans of all ages will enjoy reliving the showdown between the Avengers and Thanos in this storybook based on the 2018 hit movie.