Modularity : Understanding the Development and Evolution of Natural Complex Systems 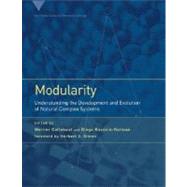