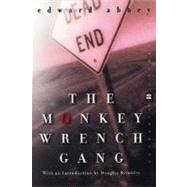 Edward Abbey called The Monkey Wrench Gang a "comic extravaganza," which it is, although one with a clear, serious message: to protect the American wilderness from the forces of commercial enterprise. The story centers on George Hayduke, an ex-Green Beret and Vietnam vet, who returns to the Southwestern desert after the war to find his beloved canyons and rivers threatened by industrial development. On a whitewater rafting trip down the Colorado River, Hayduke joins forces with three others who share his indignation and want to do something about it: feminist saboteur and Bronx exile Bonnie Abzug, wilderness guide and outcast Mormon Seldom Seen Smith, and libertarian billboard torcher Doc Sarvis, M.D. Together they venture off to become eco-raiders, waging war on the strip miners, clear-cutters, and the highway, dam, and bridge builders who are turning their natural habitat into a wasteland. The misadventures of this motley group make for an uproarious blend of chaos, conflict, and comedy.
Edward Abbey, a onetime forest ranger, was born in Home, Pennsylvania, in 1927, and spent most of his life in the American Southwest. He is the author of numerous works of fiction and nonfiction, including the much-celebrated Desert Solitaire, which decried the waste of America's wilderness and established Abbey as one of the country's foremost defenders of the natural environment. Abbey died in 1989.
What is included with this book?

Dr. Sarvis with his bald mottled dome and savage visage, grim and noble as Sibelius, was out night-riding on a routine neighborhood beautification project, burning billboards along the highway—U.S. 66, later to be devoured by the superstate's interstate autobahn. His procedure was simple, surgically deft. With a five-gallon can of gasoline he sloshed about the legs and support members of the selected target, then applied a match. Everyone should have a hobby.

In the lurid glare which followed he could be seen shambling back to the Lincoln Continental Mark IV parked nearby, empty gas can banging on his insouciant shanks. A tall and ponderous man, shaggy as a bear, he cast a most impressive shadow in the light of the flames, across the and scene of broken whiskey bottles, prickly pear and buckhorn cholla, worn-out tires and strips of retread. In the fire's glare his little red eyes burned with a fierce red fire of their own, matching the candescent coal of the cigar in his teeth—three smoldering and fanatic red bulbs glowing through the dark. He paused to admire his work:

Hub of the Land of Enchantment

Headlights swept across him from the passing traffic. Derisive horns bellowed as sallow pimply youths with undescended testicles drove by in stripped-down zonked-up Mustangs, Impalas, Stringrays and Beetles, each with a lush-lashed truelove wedged hard overlapping-pelvis-style on the driver's lap, so that seen from the back through the rear window in silhouette against oncoming headlights the car appeared to be "operated" by a single occupant with—anomaly—two heads; other lovers screamed past jammed butt to groin on the buddy seats of 880-cc chopped Kawasaki motorbikes with cherry-bomb exhaust tubes—like hara-kiri, kamikaze, karate and the creeping kudzu vine, a gift from the friendly people who gave us (remember?) Pearl Harbor—which, blasting sparks and chips of cylinder wall, roared shattering like spastic technical demons through the once-wide stillness of Southwestern night.

No one ever stopped. Except the Highway Patrol arriving promptly fifteen minutes late, radioing the report of an inexplicable billboard fire to a casually scornful dispatcher at headquarters, then ejecting self from vehicle, extinguisher in gloved hand, to ply the flames for a while with little limp gushes of liquid sodium hydrochloride ("wetter than water" because it adheres better, like soapsuds) to the pyre. Futile if gallant efforts. Dehydrated by months, sometimes years of desert winds and thirsty desert air, the pine and paper of the noblest most magnificent of billboards yearned in every molecule for quick combustion, wrapped itself in fire with the mad lust, the rapt intensity, of lovers fecundating. All-cleansing fire, all-purifying flame, before which the asbestos-hearted plutonic pyromaniac can only genuflect and pray.

Doc Sarvis by this time had descended the crumbly bank of the roadside under a billowing glare from his handiwork, dumped his gas can into trunk of car, slammed the lid—where a bright and silver caduceus glisters in the firelight—and slumped down in the front seat beside his driver.

He flipped away his cigar butt, out the open window into the ditch—the trace of burning arc remains for a moment in the night, a retinal afterglow with rainbow-style trajectory, its terminal spatter of sparks the pot of gold-and unwrapped another Marsh-Wheeling, his famous surgeon's hand revealing not a twitch or tremor.

The big car glided forward with murmurous motor, wheels crunching tin cans and plastic picnic plates on the berm, packed bearings sliding in the servile grease, the pistons, bathed in oil, slipping up and down in the firm but gentle grasp of cylinders, connecting rods to crankshaft, crankshaft to drive shaft through differential's scrotal housing via axle, all power to the wheels.

They progressed. That is to say, they advanced, in thoughtful silence, toward the jittery neon, the spastic anapestic rock, the apoplectic roll of Saturday night in Albuquerque, New Mexico. (To be an American for one Saturday night downtown you'd sell your immortal soul.) Down Glassy Gulch they drove toward the twenty-story towers of finance burning like blocks of radium under the illuminated smog.

Past a lit-up funeral parlor in territorial burnt-adobe brick: Strong-Thorne Mortuary—"Oh Death Where Is Thy Sting?" Dive! Beneath the overpass of the Sante Fe (Holy Faith) Railroad—"Go Santa Fe All the Way."

"Yeah, but it interferes with my driving if you don't mind."

"Yeah, Doc, okay, but you're gonna get us in a wreck and my mother will sue."

Beyond the prewar motels of stucco and Spanish tile at the city's western fringe, they drove out on a long low bridge.

She stopped the car. Doc Sarvis gazed down at the river, the Rio Grande, great river of New Mexico, its dark and complicated waters shining with cloud-reflected city light.

They listened. The river was mumbling something down below, something like a message: Come flow with me, Doctor, through the deserts of New Mexico, down through the canyons of Big Bend and on to the sea the Gulf the Caribbean, down where those young sireens weave their seaweed garlands for your hairless head, 0 Doc. Are you there? Doc?

Excerpted from The Monkey Wrench Gang by Edward Abbey
All rights reserved by the original copyright owners. Excerpts are provided for display purposes only and may not be reproduced, reprinted or distributed without the written permission of the publisher.