Morgante: The Epic Adventures of Orlando and His Giant Friend Morgante 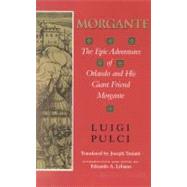 Now in paperback!MorganteThe Epic Adventures of Orlando and His Giant Friend MorganteLuigi PulciTranslated by Joseph TusianiIntroduction and Notes by Edoardo A. Lèbano"Pulci's Morgante is a multilayered text... so rich in witticisms, ribaldry, and word games that it has defied accurate rendering into English. Tusiani, an experienced and effective translator and poet, has met the challenge with a fluid contemporary version, effectively conveying the tempo of the original as well as its comic verve." -- F. A. Bassanese, Choice"Luigi Pulci, with Joseph Tusiani's translation and Edoardo A. Lèbano's commentary, has entered the pantheon of Italian epic poetry translated into English thus far infabited only by his three Italian followers: Matteo Maria Boiardo, Ludovico Ariosto, and Torquato Tasso." -- Dino S. Cervigni, Italian Quarterly"A reference work that no scholar of the Italian Renaissance can afford to ignore. Lèbano has done justice to Tusiani's text and Tusiani has done justice to Pulci's masterpiece." -- Gaetano Cipolla, Annali d'ItalianisticaA classic picaresque epic detailing the thrilling exploits of Orlando, Morgante is a tale of war and of the calamities that befall the romantic hero, his fellow knights, and their sovereign, Charlemagne. Orlando encounters the fierce Morgante and converts him; the giant then becomes his squire and trusted companion.This long-awaited annotated English translation will lead to a new appreciation of Luigi Pulci's singular epic masterpiece and a reassessment of the author's influence on modern English literature.Luigi Pulci (1432--1484) has been called the first Romantic poet after Dante. Admired by Lord Byron, Pulci was a major influence on the English Romantic poets. He was born in Florence to a noble family and was a member of the literary circle of his friend Lorenzo de Medici.Joseph Tusiani is Distinguished Service Professor (retired) at The City University of New York. His other translations include The Complete Poems of Michelangelo, Tasso's Jerusalem Delivered and Creation of the World, Boccaccio's Nymphs of Fiesole, Leopardi's Canti, and Dante's Lyric Poems. He is also author of several collections of verse in English, Italian, and Latin.Edoardo A. Lèbano, Professor of French and Italian at Indiana University, has published on Luigi Pulci's culture and works.Indiana Masterpiece Editions