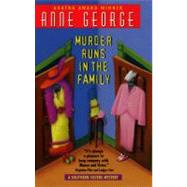 Mary Alice has spared nothing for her only daughter's wedding -- from seventy-five yards of bridal train to gourmet food for over three hundred guests and enough glittering elegance to make Mary Alice think about finding herself a fourth rich husband to pay for it all. Practical Patricia Anne has put away her aunt-of-the-bride blue chiffon and settled back into domesticity when fun-loving Mary Alice calls to say they have a post-wedding date with a genealogist from the groom's side of the family. Lunch is a fascinating lesson on the hazards of finding dirty linens in ancestral boudoirs that ends abruptly when their guest scurries off with the local judge, leaving the sisters with their mouths open -- and finishing their luncheon companion's cheesecake -- when the police arrive. Their mysterious guest has taken a plunge from the ninth floor of the courthouse building -- an apparent suicide. But given the scandals a nosy genealogist might have uncovered, the sisters are betting that some proud Southern family is making sure their shameful secrets stay buried. . .along with anyone who tries to dig them up.
Murder Runs in the Family
A Southern Sisters Mystery

Pukey Lukey is here," my sister Mary Alice murmured as she was ushered into the front pew beside me. She turned and gave the groomsman a little wave.

"Did she say Pukey Lukey's here?" my husband Fred whispered into my left ear.

I nodded. Luke is our cousin from Columbus, Mississippi, who always went to the beach with us when we were children. His car sickness was so epic, it has become a family legend.

"You look great," I whispered to Mary Alice. And she did. She actually looked rather regal with her usually pink hair calmed down to an ash blonde, and the tunic top of her lavender dress knocking off about thirty pounds. Which still left her at well over two hundred. "Five twelve and pleasingly plump," she describes herself.

"Hmmm," Mary Alice said, checking me out. "You look good, too, Patricia Anne." Rare praise. I smoothed the blue chiffon skirt I had bought at The Petite Shoppe, size six. Mary Alice and I are asked all the time if we are really sisters. Mary Alice some times asks what they mean by "really," which con fuses the questioner. I tell her that's tacky, that God knows, after sixty years, she should be used to the question and just answer yes.

"Tell her I like your gray hair," Fred whispered.

I thought about this a moment. Then, "Fred likes my gray hair," I relayed to Sister.

Mary Alice looked around. 'Do you think the flowers are too dark a pink?" she whispered.

"Absolutely not. They're beautiful."

"I cannot believe Debbie is having a wedding like this."

I couldn't either. Mary Alice's daughter, my niece Debbie Nachman, is a successful thirty-six-year-old lawyer, the single mother of two-year-old twin daughters. When she and her fianci, Henry Lamont, announced at Christmas that they were being married in March, none of us had expected Pomp and Circumstance. But they fooled us. Which was how we ended up in the first row of St. Mark's with at least three hundred people in the pews behind us.

"That stained-glass window doesn't look much like Jesus," Sister muttered.

"What did she say?" Fred asked.

"She said that stained-glass window doesn't look like Jesus." "She should know. Probably knew him." "What did he say?" Mary Alice asked. "Nothing.' I raised my eyebrows at Fred. At sixty five, Mary Alice is only five years older than I am. Two years older than Mr. Smart Alec on my left.

"Yes, he did. He said something about how old I am."

"What did she say?" Fred whispered.

The organ segued into "Ode to Joy," and the crowd rustled expectantly. The side door opened and Henry, the groom, and our son Freddie, the best man, followed the minister out. They looked so handsome, I opened my purse and started looking for a Kleenex.

"What did she say?" Fred asked.

The men turned to face the audience. Freddie smiled at us, and all three of us made chewing motions madly. For a second he looked surprised, and then we saw his Adam's apple disappear as he swallowed. He poked Henry with his elbow, and in a minute Henry's gum went down, too.

Our daughter, Haley, was the first down the aisle. The rose-colored bridesmaid dress, while not practical, was very becoming. Its Basque bodice made her waist look incredibly tiny, and the color gave her olive skin a pink glow.

Mary Alice's daughter, Marilyn, was her sister's matron of honor. Almost six feet tall and brunette, she was so much like her mother had been at that age, it was eerie. To see her standing by my five-one, reddish blond Haley was to see Sister and me thirty years before.

The organ crashed into a fanfare that brought everyone to their feet, and the bride swept down the aisle on her cousin Philip Nachman's arm: Really swept. Her dress would have put Princess Di's to shame.

'My God," Fred said. 'That much virginal white could damage your retina."

"Shut up." I punched him with my elbow as we sat back down.

"Dearly beloved," the minister began. Mary Alice and I both got out Kleenex.

It was a traditional ceremony. Debbie, this most independent of women in her thirties, who had been making it on her own for years and doing a fine job of it, thank-you-ma'am, and who, when she decided she wanted children, had been inseminated at the University sperm bank, was "given" by her cousin to Henry Lamont, who was seven years her junior. A wonderful man, granted, but without the proverbial pot to pee in. A temporary condition. Henry was going to be one of the great American chefs. We all knew it.

After the vows were exchanged, Debbie and Henry knelt for a prayer, and then the organist blasted out the recessional. They stopped to kiss Mary Alice and an elderly cousin of Henry's who had sat in the mother's place on his side. The wedding party rushed by, grinning, and then Philip Nachman escorted his Aunt Sister out while Freddie collected Henry's cousin.

People were getting up, talking, laughing. I wiped my eyes one last time.

"That was a sticking wedding," I said.

"You know. You can just tell some couples are going to stick together."

We worked our way out into the aisle.

"Didn't you tell me Mary Alice promised old Philip to raise Debbie as a Jew?" Fred asked. "I, wouldn't exactly call this place a temple. Maybe a cathedral."

The 'old' Philip that Fred was referring to was Debbie's father, Mary Alice's second husband. He was also the uncle of "young" Philip Nachman, his namesake, who had given the bride away. "She said she forgot to," I explained.

"She forgot to?" Fred laughed, really laughed, was still laughing as we went out the church door. And I realized I hadn't heard that deep chuckling laugh of his in quite some time. A pinprick of worry tingled for a second. But only for a second, as we were caught up in the crowd of friends and relatives that milled around the front of the church.

"Patricia Anne!" Pukey Lukey hugged me. He is a distinguished-looking multi-millionaire insurance executive in his sixties. He is married to a lovely woman and is the father of a member of the House of Representatives. In short, he has led an exemplary life, been a shining star in the family pantheon. Mary Alice still hates him.

"There was puke in his eyelashes!" she says. "It's one thing to be car sick, but he just exploded. Ruined every vacation we ever went on."

Sister remembers these early excursions to the beach better than I do. I like Luke, though I tend to keep my distance--just in case.

'Luke,' I said, moving back, "how nice to see you. I know Sister will be thrilled you're here."

He looked pleased. I think he still harbors the hope that Mary Alice will forgive him some day. After all, it has been sixty years.

Murder Runs in the Family
A Southern Sisters Mystery. Copyright © by Anne George. Reprinted by permission of HarperCollins Publishers, Inc. All rights reserved. Available now wherever books are sold.

Excerpted from Murder Runs in the Family by Anne George
All rights reserved by the original copyright owners. Excerpts are provided for display purposes only and may not be reproduced, reprinted or distributed without the written permission of the publisher.