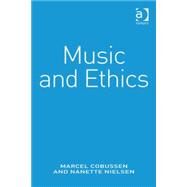 It seems self-evident that music plays more than just an aesthetic role in contemporary society. In addition, music's social, political, emancipatory, and economical functions have been the subject of much recent research. Given this, it is surprising that the subject of ethics has often been neglected in discussions about music. The various forms of engagement between music and ethics are more relevant than ever, and require sustained attention. Music and Ethics examines different ways in which music can 'in itself' in a uniquely musical way contribute to theoretical discussions about ethics as well as concrete moral behaviour. We consider music as process, and music-making as interaction. Fundamental to our understanding is music's association with engagement, including contact with music through the act of listening, music as an immanent critical process that possesses profound cultural and historical significance, and as an art form that can be world-disclosive, formative of subjectivity, and contributive to intersubjective relations. Music and Ethics does not offer a general musico-ethical theory, but explores ethics as a practical concept, and demonstrates through concrete examples that the relation between music and ethics has never been absent.
What is included with this book?