My Life in Jewish Renewal A Memoir 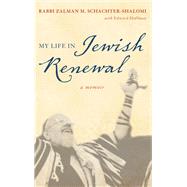 This powerful memoir chronicles the life of one of America's most celebrated rabbis-Rabbi Zalman M. Schachter-Shalomi, or Reb Zalman as he is fondly known to friends and followers. The book traces his life from a youth in the shadow of the Nazis through the tumultuous 1960s in America to his position as a renowned religious leader today.Often controversial for his attraction to cultural mavericks and religious rebels, Reb Zalman's colorful lifetime includes a striking cast of characters, including Timothy Leary, Elie Wiesel, Abraham Maslow, and more. He has developed deep relationships across faith traditions, including the Catholic theologian Thomas Merton. The book discusses these relationships, as well as his historic encounter with the Dalai Lama, as featured in the popular book and film The Jew in the Lotus. It also describes the founding of the now coast-to-coast Jewish Renewal movement and Reb Zalman's pioneering work on sage-ing for the elderly.Reb Zalman often illustrates his talks with stories from his life, and My Life in Jewish Renewal brings together the complete life story of this beloved leader for the first time.
What is included with this book?