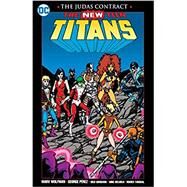 Back in the eighties, THE NEW TEEN TITANS became DC’s most popular title and a huge sales success. The series reached its greatest heights with the Judas Contract storyline--a multipart epic that played on comics readers’ expectations and offered shocking revelations and surprising twists at every turn. From the retirement of Robin and Kid Flash, to the birth of Nightwing and the introduction of Jericho, to the ultimate betrayal of a Titan, “The Judas Contract” kept readers positively riveted during its initial run, and still has fans talking today.

THE JUDAS CONTRACT is written by fan-favorite author Marv Wolfman (NEW TEEN TITANS, RAVEN). Collects THE NEW TEEN TITANS #39 and 40, TALES OF THE TEEN TITANS #41-44 and ANNUAL #3.
One of the most prolific and influential writers in modern comics, Marv Wolfman began his career as an artist. Wolfman has helped shape the heroic careers of DC Comics' Green Lantern, Blackhawk and the original Teen Titans, as well as Marvel Comics' Fantastic Four, Spider-Man, Nova and Dracula. In addition to co-creating THE NEW TEEN TITANS and CRISIS ON INFINITE EARTHS with George Pérez, Wolfman was instrumental in the revamp of Superman after CRISIS. Wolfman has also written several novels and worked on the Superman: The Animated Series and the Teen Titans animated series on Cartoon Network.