The Old South's Modern Worlds Slavery, Region, and Nation in the Age of Progress 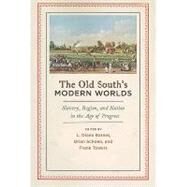 Before the Civil War, America's slave states were enmeshed in the modernizing trends of their time but that history has been obscured by a deeply ingrained view of the Old South as an insular society with few outward connections. The Old South's Modern Worlds looks beyond this myth of an isolated and backward-looking South to identify some of the many ways that the modern world shaped antebellum southern society. Removing the screen of southern traditionalism turns up new stories about slaves as religious missionaries, Native Americans as hard-driving capitalists, cotton cultivators as genetic scientists, proslavery politicians as nationalists, and planters as experimenters in sexuality. The essays gathered in this volume not only tell these jarringly modern tales of the Old South, they also explore the compatibility of slavery--the defining feature of antebellum southern life--and cultural and material markers of modernity such as moral reform, cities, and industry. The Old South emerges from this volume in a new relationship to national and global histories. Considered as proponents of American manifest destiny, antebellum southern politicians look more like nationalists and less like separatists. Southerners' enthusiasm for humanitarian missions and their debates with moral reformers across the Atlantic bring out the global currents that cut against the localism of southern life. The roles that cities played in marketing, policing, and leasing slaves counteracted the erosion of slave discipline in urban settings. The turmoil that changes in Asian and European agriculture wrought among southern staple producers show the interconnections between seemingly isolated southern farms and markets in distant lands. Diverse and riddled with contradictory impulses, antebellum southerners encounters with modernity reveal the often discomforting legacies left by the Old South on the future of America and the world.
L. Diane Barnes is Associate Professor of History at Youngstown State University, associate editor of the Frederick Douglass Papers, and author of Artisan Workers in the Upper South: Petersburg, Virginia, 1820-1865. Brian Schoen is Associate Professor of History at Ohio University and author of The Fragile Fabric of Union: Cotton, Federal Politics, and the Global Origins of the Civil War. Frank Towers is Associate Professor of History at the University of Calgary and author of The Urban South and the Coming of the Civil War.
What is included with this book?