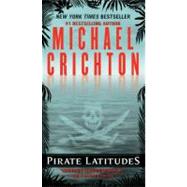 The Caribbean, 1665. A remote colony of the English Crown, the island of Jamaica holds out against the vast supremacy of the Spanish empire. Port Royal, its capital, is a cutthroat town of taverns, grog shops, and bawdy houses. In this steamy climate there's a living to be made, a living that can end swiftly by disease-or by dagger. For Captain Charles Hunter, gold in Spanish hands is gold for the taking, and the law of the land rests with those ruthless enough to make it.Pirate Latitudes is Michael Crichton at his best: a rollicking adventure tale pulsing with relentless action, crackling atmosphere, and heart-pounding suspense.
What is included with this book?