Poseidon and the Sea of Fury Graphic Novel 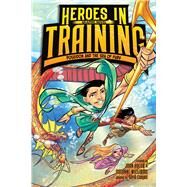 A young Poseidon must triumph over aquatic terrors in this second graphic novel adapted from the popular Heroes in Training series!

The terrible Titans—merciless giants who enjoy snacking on humans—have dominated the earth and driven the world into chaos. But their rule is about to be put to the test as a group of young Olympians discover their powers and prepare to righteously rule the universe...

The terrible Cronus and his Titan buddies are in hot pursuit of Zeus, Hera, and Poseidon, who plan to travel across the treacherous boiling sea to save a fellow Olympian. They have a boat, but they also have a problem: Poseidon can’t swim and is terrified of the water (well, really of the creatures that lurk in its depths).

The group faces danger after danger as they battle singing sirens, a fishy and ferocious Titan named Oceanus, and people-eating monsters sent by Cronus himself. Can Poseidon overcome his fears and help his fellow heroes escape Cronus and his cronies?
Joan Holub has authored and/or illustrated over 140 children’s books, including the Goddess Girls series, the Heroes in Training series, the New York Times bestselling picture book Mighty Dads (illustrated by James Dean), and Little Red Writing (illustrated by Melissa Sweet). She lives in North Carolina and is online at JoanHolub.com.

David Campiti is an animation producer and voiceover actor and is CEO of Glass House Graphics/Cutting Edge Animation & Publishing Services. His talent team has worked on such features as Despicable Me, Rio, Gnomeo & Juliet, and Horton Hears a Who—and fully produced Niko: The Journey to Magika and El Americano.
What is included with this book?