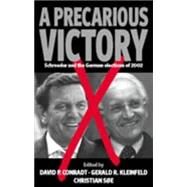 The 2002 campaign and election was one of the most dramatic in the history of the Federal Republic. An unprecedented last minute swing narrowly re-elected the Social Democratic-Green government of Chancellor Schroeder. The campaign featured the first-ever American style television debate between the two candidates for the chancellorship. Foreign policy, particularly the refusal of Schroeder to support the Iraq policies of US President George W. Bush, played an unusually important role. In the aftermath of the election the government was faced with a deteriorating economy and the charge of the opposition that it had deliberately mislead voters during the campaign. In this volume, distinguished experts from both sides of the Atlantic analyse these and other critical issues. Their work is based on extensive research in Germany and Washington, which included interviews with major political figures and the collection of new campaign and election data. Contributors:William Patterson, E. GeneFrankland, Clay Clemens, ChristianSøe, Gerald R.Kleinfeld, David Patton, Dieter Roth, Mary N. Hampton, FerdinandBreitbach, Irwin Collier, Helga Welsh, StephenSzabo.
What is included with this book?