Preemptive Love Pursuing Peace One Heart at a Time 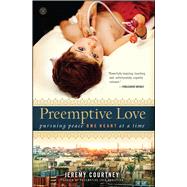 A personal account of the Courtney family and the Preemptive Love Coalition, as they help children obtain lifesaving surgeries in Iraq using one simple but powerful tool: a love that strikes first.

In the middle of the Iraq War, Jeremy and Jessica Courtney found themselves with their two children caught up in the turmoil, just hoping to make a difference. After an encounter with a father whose little girl was dying from a heart defect, they began to investigate options for helping and learned that untold thousands of children across Iraq were in similar need, waiting in line for heart surgery in a country without a qualified heart surgeon.

With the help of their closest friends, they dived in to save the lives of as many as they could, but sending children abroad proved to be expensive and cumbersome, and it failed to make an impact on the systemic needs of Iraqi hospitals—the place where these children really should be saved. Despite fatwas, death threats, bombings, imprisonments, and intense living conditions, Jeremy and his team persevered to overcome years of hostilities and distrust in an effort to eradicate the backlog of thousands upon thousands of Iraqi children waiting in line for much-needed heart surgery.

“This true story of people coming together to live the doctrine of 'love first, ask questions later' by building bridges and saving lives is powerfully inspiring, touching, and, unfortunately, urgently relevant” (Publishers Weekly). “Courtney’s moving story gives us some of the best news to come out of Iraq in ages” (Los Angeles Times).
Jeremy Courtney is cofounder and executive director of the Preemptive Love Coalition (PLC), an international development organization based in Iraq that provides lifesaving heart surgeries to Iraqi children and trains local doctors and nurses. Jeremy resides in Iraq with his wife, two children, and an indispensable team of dear friends.