The Presidency, Congress, and Divided Government: A Postwar Assessment 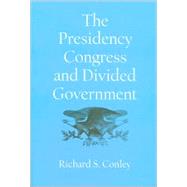 Can presidents hope to be effective in policy making when Congress is ruled by the other party? Political scientist Richard S. Conley brings to this crucial discussion a fresh perspective. He argues persuasively that the conditions of "divided government" have changed in recent years, and he applies a rigorous methodology that allows the testing of a number of important assumptions about party control of the legislative process and the role of the president.

Conley demonstrates that recent administrations have faced a very different playing field than those in the earlier postwar years because of such critical developments in electoral politics as decreasing presidential coattails and the lack of presidential popularity in opposition members' districts. Moreover, he identifies several changes in the institutional setting in Congress that have affected both the legislative success rates of presidents' programs and the strategies presidents pursue. These institutional factors include more assertive legislative majorities, changes in leadership structure, and in

Richard S. Conley, an assistant professor of political science at the University of Florida, has had a number of articles on American and Canadian politics published in scholarly journals. He holds a Ph.D. from the University of Maryland and a M.A. from McGill University in Montreal, Canada
What is included with this book?