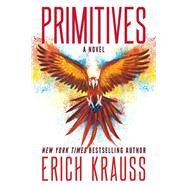 "Primitives easily earns a score of 4 out of 4 for its thrilling adventure and masterful storytelling. It would most appeal to fans of science fiction looking for a gritty, fascinating, post-apocalyptic world and a daring adventure. As for me, it has been a very long time since a book has grabbed me the way this one did, and I can see myself reading it again and again. Primitives has earned itself a permanent place on my bookshelf.”
- OnlineBookClub

"This plotline.....unfolds with enough twists and turns to keep readers invested, and the satisfying ending will have readers curious about what Krauss does next."
-Publisher's Weekly

Thirty years after The Great Fatigue infected the globe—and the treatment regressed most of the human race to a primitive state—Seth Keller makes a gruesome discovery in his adoptive father’s makeshift lab. This revelation forces him to leave the safety of his desert home and the only other person left in the world…at least, as far as he knows.

Three thousand miles away in the jungles of Costa Rica, Sarah Peoples has made her own discovery—just as horrific, and just as life-changing. It will take her far from the fledgling colony of New Haven, yet never out of reach of its ruthless authoritarian leader.

On separate journeys a world apart, Seth and Sarah find themselves swept up in a deadly race to save humankind. Their fates will come crashing together in an epic struggle between good and evil, where the differences aren’t always clear. Among the grim realities of civilization’s demise, they discover that the remaining survivors may pose an even greater threat than the abominations they were taught to fear.

Fighting for their lives, they’re confronted with a haunting question.

Does humanity deserve to survive?

Primitives, the first book of this saga, is a tale of bravery and self-discovery found in the ruins of a dying world, where the darkest sides of human nature are revealed.
Erich Krauss is a New York Times bestselling author and has written more than thirty books. For more than two decades he traveled the globe searching for inspiration for his writing, including fighting professionally in Muay Thai bouts in Thailand, living with an Indian tribe deep in the Amazon, hang gliding throughout Central America, and bicycling across the United States and Canada. While writing on the road, he dreamed up a new publishing model where author and publisher work closely together to bring the best possible books to market. In 2006 he created Victory Belt Publishing and applied this model, which quickly led to a host of runaway New York Times and international bestsellers. After more than fifteen years as president and publisher of Victory Belt, Krauss took a step back in 2020 to revisit his passion—writing fiction. Drawing from his world travels as well as the current global health crisis, he wrote Primitives, a post-apocalyptic thriller in the vein of two of his favorite novels, World War Z and The Road.
What is included with this book?