Rationality and Reflection How to Think About What to Think 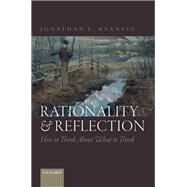 Jonathan L. Kvanvig presents a conception of rationality which answers to the need arising out of the egocentric predicament concerning what to do and what to believe. He does so in a way that avoids, on the one hand, reducing rationality to the level of beasts, and on the other hand, elevating it so that only the most reflective among us are capable of rational beliefs. Rationality and Reflection sets out a theory of rationality--a theory about how to determine what to think--which defends a significant degree of optionality in the story of what is reasonable for people to think, and thereby provides a framework for explaining what kinds of rational disagreement are possible. The theory is labelled Perspectivalism and it offers a unique account of rationality, one that cuts across the usual distinctions between Foundationalism and Coherentism and between Internalism and Externalism. It also differs significantly from Evidentialism, maintaining that, to the extent that
rationality is connected to the notion of evidence, it is a function both of the evidence one has and what one makes of it.

Jonathan L. Kvanvig is Distinguished Professor of Philosophy at Baylor University, having held previous faculty positions at the University of Notre Dame, Texas A&M University, and the University of Missouri. His scholarly activities focus in metaphysics & epistemology and philosophy of religion, including related topics in philosophy of language and philosophy of logic, with thirteen books and over one hundred articles published. He is the editor of the prestigious Oxford Studies in the Philosophy of Religion. He has received grants from the NEH and the Templeton Foundation for scholarly activities, and is the recipient of distinguished research awards from Texas A&M and Baylor.
What is included with this book?