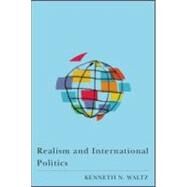 Realism and International Politics brings together the collected essays of Ken Waltz, one of the most important and influential thinkers of international relations in the second half of the twentieth century. His two books Man, the State and War and Theory of International Politics are classics of International Relations theory and gave birth to the school of thought known as neo-realism or structural realism, out of which many of the current crop of realist scholars and thinkers have emerged. It is an essential volume for both students and scholars.
Kenneth N. Waltz is Senior Research Associate at the Institute of War and Peace Studies at Columbia University. He is Emeritus Professor at University of California at Berkeley. He is a past president of the American Political Science Association.
What is included with this book?