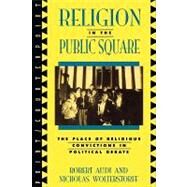 This vigorous debate between two distinguished philosophers presents two views on a topic of worldwide importance: the role of religion in politics. Audi argues that citizens in a free democracy should distinguish religious and secular considerations and give them separate though related roles. Wolterstorff argues that religious elements are both appropriate in politics and indispensable to the vitality of a pluralistic democracy. Each philosopher first states his position in detail, then responds to and criticizes the opposing viewpoint. Written with engaging clarity, Religion in the Public Square will spur discussion among scholars, students, and citizens.
What is included with this book?