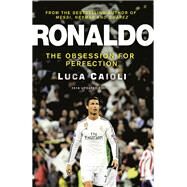 Season after season, Cristiano Ronaldo continues to prove that he is one of soccer’s true greats. A three-time winner of the FIFA Ballon d’Or and the man whose astonishing goalscoring feats have fired much of Real Madrid’s recent success, he is driven by an insatiable desire to succeed and to improve himself year after year.

Here Madrid-based journalist Luca Caioli tells the inside story of the global superstar, featuring insights from those who know him best: coaches, teammates, girlfriends and even the man himself.

Updated to include all the action from 2014/15 — a campaign in which he claimed the European Golden Shoe for a record fourth time — Ronaldo lays bare the career of a modern soccer icon.
Luca Caioli is the best-selling author of Messi, Ronaldo, Neymar and Suarez. A renowned Italian sports journalist, he lives in Spain working for SKY Italia and Corriere della Sera.