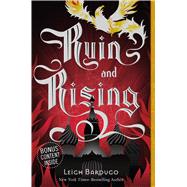 The third book in The Grisha Trilogy by the #1 New York Times bestselling author of Six of Crows and Crooked Kingdom.

Soldier. Summoner. Saint. In the final battle, who will rise?

The capital has fallen. The Darkling rules Ravka from his shadow throne.

Now the nation's fate rests with a broken Sun Summoner, a disgraced tracker, and the shattered remnants of a once-great magical army.

Deep in an ancient network of tunnels and caverns, a weakened Alina must submit to the dubious protection of the Apparat and the zealots who worship her as a Saint. Yet her plans lie elsewhere, with the hunt for the elusive firebird and the hope that an outlaw prince still survives.

Alina will have to forge new alliances and put aside old rivalries as she and Mal race to find the last of Morozova's amplifiers. But as she begins to unravel the Darkling's secrets, she reveals a past that will forever alter her understanding of the bond they share and the power she wields. The firebird is the one thing that stands between Ravka and destructionand claiming it could cost Alina the very future she's fighting for.

Ruin and Rising is the thrilling final installment in Leigh Bardugo's New York Times bestselling Grisha Trilogy. The adventure began in book one, Shadow and Bone, and book two, Siege and Storm. This title has Common Core connections, and this deluxe paperback edition contains bonus materials including an interview with author Leigh Bardugo, a bonus short story about the Darkling, and an excerpt of Six of Crows.

Praise for The Grisha Trilogy

Triumphant . . If opener Shadow and Bone was a magical coming-of-age story and middle-volume Siege and Storm was a political thriller, then this third book is an epic quest. . . Every time readers may think she's written herself into a corner, Bardugo pulls off a twist that, while surprising, will keep them turning pages furiously. Kirkus Reviews, starred review on Ruin and Rising

Set in a fascinating, unique world rich with detail, Shadow and Bone was unlike anything I've ever read. Veronica Roth, New York Times bestselling author of Divergent, on Shadow and Bone

Mesmerizing. . . . This is what fantasy is for. New York Times Book Review on Shadow and Bone

Romantic and magical . . . Plenty of plot twists and betrayals kept us enjoying this richly crafted adventure until the very last page. (P.S. A do-not-miss for fans of Graceling.)Justine magazine, on Shadow and Bone

A heady blend of fantasy, romance, and adventure. Rick Riordan, author of the bestselling Percy Jackson series, on Siege and Storm

Leigh Bardugo is the author of the New York Times bestsellers Shadow and Bone and Siege and Storm. She was born in Jerusalem, grew up in Los Angeles, graduated from Yale University, and has worked in advertising, journalism, and most recently makeup and special effects. These days she lives and writes in Hollywood, where she can occasionally be heard singing with her band.