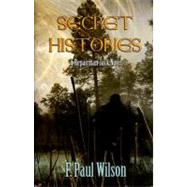 THE FIRST OF A TRILOGY OF REPAIRMAN JACK PREQUELS Read for the first time Jack's formative years. You'll meet his mother and father, big sister Kate and his bully of a brother Tom. While aimed for young adults, F. Paul Wilson doesn't write down and the book is as enjoyable for adults as it is for teens. And, as you can see from the above description there's plenty of foreshadowing of events that were to overtake Jack as an adult (i.e. An old woman with a dog ?????? making herself known to Jack when he's just fourteen!)