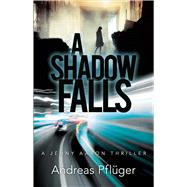 Five years ago, Jenny Aaron was the star member of an elite team charged with tracking Germany's most dangerous criminals — until a shot to the head left her irreversibly blind. Four weeks ago, Aaron tested the new skills that she's acquired in her world of darkness against Ludger Holm, the psychopath who fired that shot. Now she's learned that her worst enemy has left her a legacy of two billion dollars. Although she knows that it's a trap, Aaron realizes that if she is ever to find peace, she must play Holm's deadly game to the bitter end.

"Compassionate moments between characters add poignancy, and a subplot involving Aaron potentially regaining her sight intrigues . . . this is a thriller worth reading." — Publishers Weekly

"A first-rate thriller." — The Sunday Times

"Author Andreas Pflüger knows the world of crime and the elite units that fight it. And he knows how to make that world — and the world we all live in — vivid." — BookTrib

German screenwriter and author Andreas Pflüger has written several episodes of the popular police procedural Tatort. His bestselling thriller, In the Dark, has been published in nine languages.