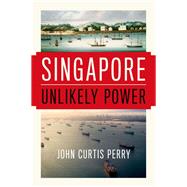 Singapore has gained a reputation for being one of the wealthiest and best-educated countries in the world and one of the brightest success stories for a colony-turned-sovereign state, but the country's path to success was anything but assured. Its strategic location and natural resources both
allowed Singapore to profit from global commerce and also made the island an attractive conquest for the world's naval powers, resulting in centuries of stunting colonialization.

In Singapore: Unlikely Power, John Curtis Perry provides an evenhanded and authoritative history of the island nation that ranges from its Malay origins to the present day. Singapore development has been aided by its greatest natural blessing-a natural deepwater port, shielded by mountain ranges
from oceanic storms and which sits along one of the most strategic straits in the world, cementing the island's place as a major shipping entrepot throughout modern history. Perry traces the succession of colonizers, beginning with China in the fourteenth and fifteenth centuries and followed by the
island's most famous colonizer, Britain, which ruled Singapore until the 1960s excluding the Japanese occupation of World War II. After setting a historical context, Perry turns to the era of independence beginning in the 1960s. Plagued with corruption, inequality, lack of an educated population,
Singapore improbably vaulted from essentially third-world status into a first world dynamo over the course of three decades-with much credit due longtime leader Lee Kuan Yew, Singapore's first prime minister who led the country for over three decades, who embraced the colonial past, established
close ties with former foe Japan, and adopted a resolutely pragmatist approach to economic development. His efforts were successful, and Singapore today is a model regime for other developing states.

Singapore's stunning transformation from a poor and corrupt colonial backwater into an economic powerhouse renowned for its wealth, order, and rectitude is one of the great-and most surprising-success stories of modern era. Singapore is an accessible, comprehensive, and indeed colorful overview of
one of the most influential political-economic models in the world and is an enlightening read for anyone interested in how Singapore achieved the unachievable.

John Curtis Perry is Professor of Maritime History in the Fletcher School of Law and Diplomacy at Tufts University.