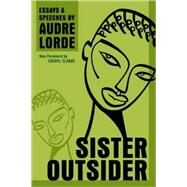 Presenting the essential writings of black lesbian poet and feminist writer Audre Lorde, SISTER OUTSIDER celebrates an influential voice in twentieth-century literature. In this charged collection of fifteen essays and speeches, Lorde takes on sexism, racism, ageism, homophobia, and class, and propounds social difference as a vehicle for action and change. Her prose is incisive, unflinching, and lyrical, reflecting struggle but ultimately offering messages of hope. This commemorative edition includes a new foreword by Lorde scholar and poet Cheryl Clarke, who celebrates the ways in which Lorde's philosophies resonate more than twenty years after they were first published. These landmark writings are, in Lorde's own words, a call to "never close our eyes to the terror, to the chaos which is Black which is creative which is female which is dark which is rejected which is messy which is. . . ." Reviews"...it's been almost a quarter of a century since Audre Lorde's essays and speeches in Sister Outsider made an indelible mark on 20th-century literature. But the words of the black lesbian feminist poet seem as lyrical and unforgettable, and, sadly, as relevant today as when she first tackled everything from racism and homophobia to ageism and class dichotomies. A must-have book that every lesbian should read."-Curve Editor's Pick "Lorde was a brilliant feminist poet and intellectual whose theories on the power of embracing our internal contradictions as well as the differences between people and groups is the way to powerful coalition building and social progress." -New York Post, Sunday "Poet and librarian Lorde collected 15 of her finest essays and speeches in this 1984 volume. With her poet's command of language, she addresses sexism, racism, black women, black lesbians, eroticism, and more. Still powerful."-Library Journal, Starred Review"Audre Lorde is a passionate sage. I say ls"is'and not ls"was'because her keen insights continue to provoke and sustain us and give us courage. The reissue of this book is a gift to longtime admirers and to new readers who have yet to discover the power and grace and splendid audacity of Audre Lorde."-Valerie Miner, author of After Eden and professor of feminist studies at Stanford University"[Lorde's] works will be important to those truly interested in growing up sensitive, intelligent, and aware."-New York Times
A writer, activist, and mother of two, Audre Lorde grew up in 1930s Harlem. She earned a master’s degree in library science from Columbia University, received a National Endowment for the Arts grant for poetry, and was New York State’s Poet Laureate from 1991 to 1993. She is the author of twelve books, including ZAMI and THE BLACK UNICORN. Lorde died of cancer at the age of fifty-eight in 1992.
What is included with this book?