So You Think You're a Cleveland Indians Fan? 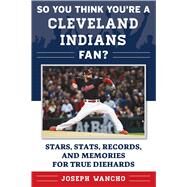 So You Think You're a Cleveland Indians Fan? tests and expands your knowledge of Indians baseball. Rather than merely posing questions and providing answers, this book will give you the details behind each story that bring to life players and managers, games and seasons.

This book is divided into multiple parts, with progressively more difficult questions in each new section. Along the way, you'll learn more about the great Indians players and managers of the past and present, from Nap Lajoie to Tris Speaker, Cy Young, Bob Feller, Lou Boudreau, Bob Lemon, Rocky Colavito, Gaylord Perry, Sandy Alomar Jr., Omar Vizquel, Jim Thome, Corey Kluber, and so many more. The many questions that this book answers include:

This book makes the perfect gift for any fan of the Tribe!
Joseph Wancho is a lifelong Cleveland Indians fan. He has been a member of the Society for American Baseball Research (SABR) since 2005 and he serves as the chair of the Minor League Research Committee. Wancho is a frequent contributor to the Biography Project, Games Project and both the Deadball and Minor League committees. He served as editor for Pitching to the Pennant: 1954 Cleveland Indians and lives in Westlake, Ohio.