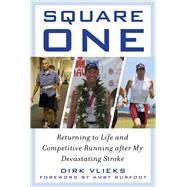 Dirk Vlieks was at the top of his game. At the age of thirty-two he was a top-ranked triathlete with numerous Ironman finishes under his belt. That all changed in an instant one day in June of 2006 when he stepped groggily from his bike in Honu, Hawaii, and collapsed. He had suffered a stroke so devastating that by the time he reached the hospital, a doctor told his wife to prepare to turn off the machines keeping him alive. Vlieks spent the next two months in intensive care before he was strong enough to begin a rehabilitation program that included learning to speak, talk, eat, and walk again. His first weaving assisted walks turned later to slow jogs, then short runs. Five years later, he returned to Hawaii to finish the race in which he nearly died. He would then run the New York City Marathon. In Square One: Returning to Life and Competitive Running After My Devastating Stroke, Vlieks shares his inspirational story about persevering against all odds. It has not been a smooth ride, and he continues to work—and run and inspire. His mission now is to help energize and motivate others to live their lives with determination and joy.
Dirk Vlieks began moving the moment he was born. From childhood days of hiking and skiing in the Alps to tennis and biking as a California teen, he did not enjoy sitting still. After playing Division I tennis for four years at St. Mary’s College in Moraga, California, and playing tennis semi-professionally in Brazil, he discovered triathlon, ultra-distance running, and skate-skiing. He has competed in multiple Ironman-distance triathlons around the world, including the Kona Hawaii Ironman. These days he looks for marathons and half marathons from his home in Mystic, Connecticut, where he lives with his wife, Kelsey, and his twin daughters, Anna and Elizabeth.

Amby Burfoot, a lifelong runner and running advocate, has been executive editor of Runner’s World magazine since 1985. In 1968, he won the Boston Marathon, the first American to do so in eleven years. He is the author of The Principles of Running and Runner’s World Complete Book of Running. He lives in Mystic, Connecticut.