The Story of French 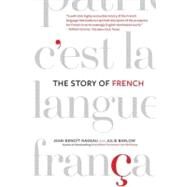 Why does everything sound better if it's said in French? That fascination is at the heart of The Story of French, the first#xA0;history of one of the most beautiful#xA0;languages in the world that was, at one time,#xA0;the pre-eminent language of literature, science and diplomacy.#xA0; Nadeau and Barlow chart the history of a language spoken as a native tongue by 130 million people around the globe.#xA0;The first document written in the French was signed by the sons of#xA0;Charlemagne in 832. After this, Latin was purged from the courts of France by Francois 1st, giving root to French speakers' 21st century obsession with language protection. The obsession progressed as Cardinal Richelieu established the French Academy, a group entrusted with the responsibility of keeping the language pure and eloquent. As French circled the globe, the international cast of characters included Montaigne,#xA0;Catherine the Great, Frederic II of Prussia, the guides of the Lewis and Clark expedition, Jules Verne,#xA0;and others.#xA0;Let#xA0;Nadeau and#xA0;Barlow guide you through the story of a language used to write some of the world's great masterpieces of literature, construct some of the most important documents of diplomacy, bedevil millions with its vagaries of pronunciation and beguile everyone with its beauty.
What is included with this book?