Tales from the Angels Dugout 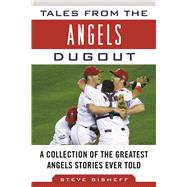 A humorous, fascinating look at the lighter side of forty-one years of frustration followed by the excitement of 2002 World Series.

Award-winning sportswriter Steve Bisheff reminds us of those colorful days with The Cowboy, Gene Autry and the struggles under the ownership of the Walt Disney Company, as well as the curses, hexes and tragedies that haunted the Angels for so long.

Bisheff contrasts zany personalities such as Bo Belinsky, Dean Chance, Albie Pearson, and Reggie Jackson with the remarkable, but non-superstar bunch managed by Mike Scioscia that finally won the World Series, including Troy Glaus, David Eckstein, Tim Salmon, and Troy Percival. In this newly-revised edition of Tales from the Angels Dugout,

Bisheff updates what has happened in the years since that great championship season, including the arrival of such notables as owner Arte Moreno, Vladimir Guerrero, Albert Pujols and of course, phenom Mike Trout.
Steve Bisheff has covered the Southern California sports scene for more than fifty years. He has been a sportswriter for the Los Angeles Herald-Examiner and the San Diego Tribune, and spent twenty-four years as an award-winning columnist with the Orange County Register. He is the author of seven books, including the critically-acclaimed John Wooden: An American Treasure and Always Compete, a profile of Pete Carroll's successful years at USC.