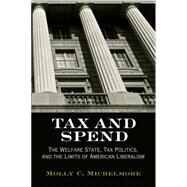 Taxes dominate contemporary American politics. Yet while many rail against big government, few Americans are prepared to give up the benefits they receive from the state. In Tax and Spend, historian Molly C. Michelmore examines an unexpected source of this contradiction and shows why many Americans have come to hate government but continue to demand the security it provides. Tracing the development of taxing and spending policy over the course of the twentieth century, Michelmore uncovers the origins of today's antitax and antigovernment politics in choices made by liberal state builders in the 1930s, 1940s, and 1950s. By focusing on two key instruments of twentieth-century economic and social policy, Aid to Families with Dependent Children and the federal income tax, Tax and Spendexplains the antitax logic that has guided liberal policy makers since the earliest days of Franklin Roosevelt's presidency. Grounded in careful archival research, this book reveals that the liberal social compact forged during the New Deal, World War II, and the postwar years included not only generous social benefits for the middle class-including Social Security, Medicare, and a host of expensive but hidden state subsidies-but also a commitment to preserve low taxes for the majority of American taxpayers. In a surprising twist on conventional political history, Michelmore's analysis links postwar liberalism directly to the rise of the Republican right in the last decades of the twentieth century. Liberals' decision to reconcile public demand for low taxes and generous social benefits by relying on hidden sources of revenues and invisible kinds of public subsidy, combined with their persistent defense of taxpayer rights and suspicion of "tax eaters" on the welfare rolls, not only fueled but helped create the contours of antistate politics at the core of the Reagan Revolution.
What is included with this book?