The Tea Party and the Remaking of Republican Conservatism 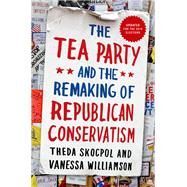 This revised edition features a new afterword, updated through the 2016 election.

On February 19, 2009, CNBC commentator Rick Santelli delivered a dramatic rant against Obama administration programs to shore up the plunging housing market. Invoking the Founding Fathers and ridiculing "losers" who could not pay their mortgages, Santelli called for "Tea Party" protests. Over the
next two years, conservative activists took to the streets and airways, built hundreds of local Tea Party groups, and weighed in with votes and money to help right-wing Republicans win electoral victories in 2010.

In this penetrating new study, Harvard University's Theda Skocpol and Vanessa Williamson go beyond images of protesters in Colonial costumes to provide a nuanced portrait of the Tea Party. What they find is sometimes surprising. Drawing on grassroots interviews and visits to local meetings in
several regions, they find that older, middle-class Tea Partiers mostly approve of Social Security, Medicare, and generous benefits for military veterans. Their opposition to "big government" entails reluctance to pay taxes to help people viewed as undeserving "freeloaders" - including immigrants,
lower income earners, and the young. At the national level, Tea Party elites and funders leverage grassroots energy to further longstanding goals such as tax cuts for the wealthy, deregulation of business, and privatization of the very same Social Security and Medicare programs on which many
grassroots Tea Partiers depend. Elites and grassroots are nevertheless united in hatred of Barack Obama and determination to push the Republican Party sharply to the right.

The Tea Party and the Remaking of Republican Conservatism combines fine-grained portraits of local Tea Party members and chapters with an overarching analysis of the movement's rise, impact, and likely fate.

Theda Skocpol is the Victor S. Thomas Professor of Government and Sociology at Harvard University, a member of the National Academy of Sciences, and past president of the American Political Science Association.

Vanessa Williamson is a PhD candidate in Government and Social Policy at Harvard University. Previously, she served as the Policy Director for Iraq and Afghanistan Veterans of America.