Tell Me Lies A Novel 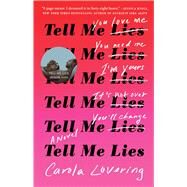 Soon to be an original series on Hulu!

“A twisted modern love story” (Parade), Tell Me Lies is a sexy, thrilling novel about that one person who still haunts you—the other one. The wrong one. The one you couldn’t let go of. The one you’ll never forget.

Lucy Albright is far from her Long Island upbringing when she arrives on the campus of her small California college and happy to be hundreds of miles from her mother—whom she’s never forgiven for an act of betrayal in her early teen years. Quickly grasping at her fresh start, Lucy embraces college life and all it has to offer. And then she meets Stephen DeMarco. Charming. Attractive. Complicated. Devastating.

Confident and cocksure, Stephen sees something in Lucy that no one else has, and she’s quickly seduced by this vision of herself, and the sense of possibility that his attention brings her. Meanwhile, Stephen is determined to forget an incident buried in his past that, if exposed, could ruin him, and his single-minded drive for success extends to winning, and keeping, Lucy’s heart.

Lucy knows there’s something about Stephen that isn’t to be trusted. Stephen knows Lucy can’t tear herself away. And their addicting entanglement will have consequences they never could have imagined.

Alternating between Lucy’s and Stephen’s voices, Tell Me Lies follows their connection through college and post-college life in New York City. “Readers will be enraptured” (Booklist) by the “unforgettable beauties in this very sexy story” (Kirkus Review). With the psychological insight and biting wit of Luckiest Girl Alive, and the yearning ambitions and desires of Sweetbitter, this keenly intelligent and supremely resonant novel chronicles the exhilaration and dilemmas of young adulthood and the difficulty of letting go—even when you know you should.
Carola Lovering attended Colorado College, and her work has appeared in W Magazine, National Geographic, Outside, and Yoga Journal, among other publications. Tell Me Lies is her first novel. She currently lives in Brooklyn.