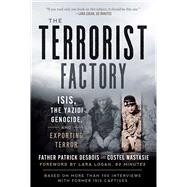 A riveting, behind-the-scenes look of the Yazidi genocide and the terrorist threat it holds for the West, based on the investigation by Father Patrick Desbois, Costel Nastasie, and their team at Yahad–In Unum, as first shown on 60 Minutes.

With testimony drawn from more than 200 interviews with Yazidi survivors—girls, women, boys, and men—recorded during 11 investigative trips to refugee camps in Iraqi Kurdistan.

"If you read only one book on this subject, it should be this one.”—Lara Logan, 60 Minutes

The massacre of the Yazidi people by ISIS was nothing less than genocide. In refugee camps in Iraqi Kurdistan, the authors brought a skilled team to interview more than a hundred ISIS survivors and document what they experienced and saw. These former slaves observed their torturers and know from the inside the secret facilities that ISIS has kept hidden from the world. What their testimony reveals is an organization whose ambition is power, regardless of their claim to be "soldiers of God." Their fighters are paid with sex, money, and the power of life and death over captives. Their promised paradise is here and now, not after death.
Men who didn't swear allegiance were executed. Women became slaves for sex or reproduction, and their offspring may still serve the cause. In mobile training camps, the captured children were drugged, indoctrinated, and taught to shoot Kalashnikovs, plant explosives, and handle suicide vests. They are the intended products of the terrorist factory. In this taut, disturbing account, the authors document a utilitarian genocide that still holds an implicit threat to other counties, including those in the West.
Father Patrick Desbois is president of Yahad–In Unum and is the Braman Endowed Professor of the Practice of the Forensic Study of the Holocaust at Georgetown University. He is the author of The Holocaust by Bullets, winner of the 2008 National Jewish Book Award, and has received numerous honors for his groundbreaking work on the Holocaust and other genocides, including the Humanitarian Award from the US Holocaust Museum, the Lantos Human Rights Prize, and the Légion d'Honneur. He resides in Washington, DC, and Paris, France.

Costel Nastasie is the founder and president of Roma Dignity and has conducted research in association with Yahad in Unum on the deportation and genocide of the Roma. He now coordinates investigations in the Middle East. Originally from Romania, he now lives in Brussels.