Theories of Play and Postmodern Fiction 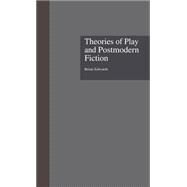 Drawing on developments in critical theory and postmodernist fiction, this study makes an important contribution to the appreciation of playforms in language, texts, and cultural practices. Tracing trajectories in theories of play and game, and with particular attention to the writings of Nietzsche, Wittgenstein, Bakhtin, and Derrida, the author argues that the concept of play provides perspectives on language and communication processes useful both for analysis of literary texts and also for understanding the interactive nature of constructions of knowledge Exploring manifestations of game and play throughout the history of Western culture, from Plato to Pynchon, this study traces developments in 20th-century cultural and literary theory of ideas about play in the writings of Johan Huizinga, Roger Caillois, Jacques Ehrmann, Bernard Suits, James Hans, Mihai Spariosu and Robert Rawdon Wilson. The author emphasizes post-structuralist developments with specific attention to deconstruction and receptiontheory and argues that deconstruction makes the most significant recent contribution to play theory in its application to language and to literature The work also explores the modes and effects of playforms in particular examples of postmodernist fiction. With attention to major works from Thomas Pynchon (Gravity's Rainbow), John Barth (LETTERS, Robert Kroetsch (What theCrow Said), Angela Carter (Nights at the Circus) and Peter Carey (Illywhacker), Edwards acknowledges and deconstructs such basic oppositions as play and seriousness, fiction and truth, difference and identity to explore the literature's cultural/political significance. Seeking to affirm the fiction's continuing social relevance, the readings presented in this book place play irresistibly at the heartland of language, meaning and culture.