This Is Your Brain on Music : The Science of a Human Obsession 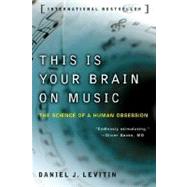 In this groundbreaking union of art and science, rocker-turned-neuroscientist Daniel J. Levitin explores the connection between musicits performance, its composition, how we listen to it, why we enjoy itand the human brain. Drawing on the latest research and on musical examples ranging from Mozart to Duke Ellington to Van Halen, Levitin reveals:  How composers produce some of the most pleasurable effects of listening to music by exploiting the way our brains make sense of the world  Why we are so emotionally attached to the music we listened to as teenagers, whether it was Fleetwood Mac, U2, or Dr. Dre  That practice, rather than talent, is the driving force behind musical expertise  How those insidious little jingles (called earworms) get stuck in our heads And, taking on prominent thinkers who argue that music is nothing more than an evolutionary accident, Levitin argues that music is fundamental to our species, perhaps even more so than language. This Is Your Brain on Musicis an unprecedented, eye-opening investigation into an obsession at the heart of human nature.
DANIEL J. LEVITIN runs the Laboratory for Musical Perception, Cognition, and Expertise at McGill University, where he holds the Bell Chair in the Psychology of Electronic Communication. Before becoming a neuroscientist, he worked as a session musician, sound engineer, and record producer working with artists such as Stevie Wonder and Steely Dan. He has published extensively in scientific journals and music magazines such as Grammy and Billboard.
This Is Your Brain On Music Introduction
I Love Music and I Love Science—Why Would I Want to Mix the Two?

1. What Is Music?
From Pitch to Timbre

3. Behind the Curtain
Music and the Mind Machine

4. Anticipation
What We Expect from Liszt (and Ludacris)

5. You Know My Name, Look Up the Number
How We Categorize Music

6. After Dessert, Crick Was Still Four Seats Away from Me
Music, Emotion, and the Reptilian Brain

7. What Makes a Musician?
Expertise Dissected