A Time to Rejoice 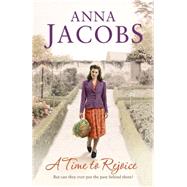 'Anna Jacobs' books are deservedly popular. She is one of the best writers of Lancashire sagas around' - Historical Novels Reviews

After a stray bomb scored a direct hit on his childhood home in Hertfordshire, the only thing that has kept Francis Brady going while he works day and night salvaging what he can from the rubble is the thought that soon he'll be joining war-time friends Mayne, Daniel and Victor as electrician in their new dream building firm in Lancashire.

But things are not going to plan: Mayne isn't answering any of his letters; Francis' wife is having a change of heart about moving up north - and her parents seem set on destroying his reputation...
A lot of marriages are breaking up in these times of change, and Francis is loathe for his to be one of them... But how can he turn down the opportunity of a new life and career in Rivenshaw?

Meanwhile in Rivenshaw itself, newly married Mayne and Judith's plans to convert Esherwood house into flats have come to an abrupt halt. While clearing out the house in readiness for the rebuild, they've discovered that someone has been stealing valuables and hiding them in the old Nissen hut. But who hid them there - and are they planning on returning for them? And are they also responsible for something else found in the shelter: a body, buried in a shallow grave...

With so much going against them, can these four friends ever turn their dreams into reality?

Anna Jacobs grew up in Lancashire and emigrated to Australia, but still visits the UK regularly to see her family and do research, something she loves. She is addicted to writing and figures she'll have to live to be 120 at least to tell all the stories that keep popping up in her imagination and nagging her to write them down. She's also addicted to her own hero, to whom she's been happily married for many years.

She is the bestselling author of over ninety novels and has been shortlisted for several awards, and Pride of Lancashire won the Australian Romantic Book of the Year Award in 2006.