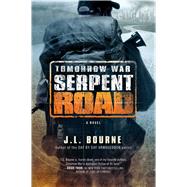 A riveting, ultra-realistic example of “dystopian fiction at its best” (Brad Thor, #1 New York Times bestselling author) from the acclaimed author of the Day By Day Armageddon novels!

During an unacknowledged mission inside the Syrian border, a government operative had unwittingly triggered an incredible worldwide event that irrevocably shaped the future of the United States.

In the aftermath of the crisis, families have struggled to survive in a world short on food, water, and electricity. Hyperinflation cripples the United States economy and post-war armored military vehicles are patrolling the streets.

One man has now stepped forward and continues to push back the dark wave of tyranny brought on by martial law in the streets of America, and may be the only hope of saving liberty for the country’s future.
J.L. Bourne is a commissioned military officer and acclaimed author of the horror series Day by Day Armageddon, and the dystopian thriller, Tomorrow War. With twenty years of active military and intelligence community service behind him, J.L. brands a realistic and unique style of fiction. He lives on the Gulf Coast but is sometimes spotted toting a rifle and a Bowie knife in the rural hills of Arkansas where he grew up. Visit him at JLBourne.com before the grid goes dark.