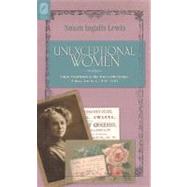 Unexceptional Women:Female Proprietors in Mid-Nineteenth-Century Albany, New York, 18301885by Susan Ingalls Lewis challenges our conceptions about mid-nineteenth-century American women, business, and labor, offering a detailed study of female proprietors in one industrializing American city. Analyzing the careers of more than two thousand women who owned or operated businesses between 1830 and 1885, Lewis argues that business provided a common, important, and varied occupation for nineteenth-century working women. Based on meticulous research in city directories, census records, and credit reports, this study provides both a demographic portrait of Albanyrs"s female proprietors and an examination of the size, scope, longevity, financing, and creditworthiness of their ventures. Although the growing city did produce several remarkable businesswomen in trades as diverse as hotel management, plumbing, and the marketing of pianos on the installment plan, Albanyrs"s female proprietors were most often self-employed artisans, shopkeepers, petty manufacturers, and service providers. These women used business as a method of self-employment and survival, as a means of both individual and family mobility, and as a strategy for immigrant assimilation into an urban economy and middle-class lifestyle. Intriguingly, among the ranks of Albanyrs"s female proprietors Lewis discovered substantial evidence of such supposedly recent phenomena as self-employment, dual-income marriages, working motherhood, home-based business, and the juggling of domestic and professional priorities. The stories of these businesswomen make fascinating reading while simultaneously providing the basis for a theoretical discussion of how to define and understand enterprise for mid-nineteenth-century women.
Susan Ingalls Lewis is associate professor of history, the State University of New York at New Paltz.
What is included with this book?