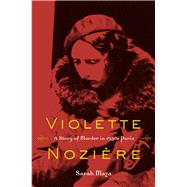 On an August evening in 1933, in a quiet, working-class neighborhood in Paris, eighteen-year-old Violette Nozière gave her mother and father glasses of barbiturate-laced "medication," which she told them had been prescribed by the family doctor; one of her parents died, the other barely survived. Almost immediately Violette's act of "double parricide" became the most sensational private crime of the French interwar era--discussed and debated so passionately that it was compared to the Dreyfus Affair. Why would the beloved only child of respectable parents do such a thing? To understand the motives behind this crime and the reasons for its extraordinary impact, Sarah Maza delves into the abundant case records, re-creating the daily existence of Parisians whose lives were touched by the affair. This compulsively readable book brilliantly evokes the texture of life in 1930s Paris. It also makes an important argument about French society and culture while proposing new understandings of crime and social class in the years before World War II.
What is included with this book?