What Can't be Said Paradox and Contradiction in East Asian Thought 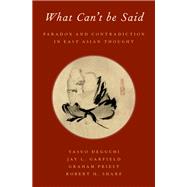 Typically, in the Western philosophical tradition, the presence of paradox and contradictions is taken to signal the failure or refutation of a theory or line of thinking. This aversion to paradox rests on the commitment-whether implicit or explicit-to the view that reality must be consistent.

In What Can't be Said, Yasuo Deguchi, Jay L. Garfield, Graham Priest, and Robert H. Sharf extend their earlier arguments that the discovery of paradox and contradiction can deepen rather than disprove a philosophical position, and confirm these ideas in the context of East Asian philosophy. They claim that, unlike most Western philosophers, many East Asian philosophers embraced paradox, and provide textual evidence for this claim. Examining two classical Daoist texts, the Daodejing and the Zhaungzi, as well as the trajectory of Buddhism in East Asia, including works from the Sanlun, Tiantai, Chan, and Zen traditions and culminating with the Kyoto school of philosophy, they argue that these philosophers' commitment to paradox reflects an understanding of reality as inherently paradoxical, revealing significant philosophical insights.

Yasuo Deguchi is Professor of Philosophy and Director of Center for Applied Philosophy & Ethics in the Graduate School of Letters, Director of Unit of Kyoto Initiatives for the Humanities and Social Sciences, Vice Provost, and Deputy Executive Vice-President of Kyoto University.

Graham Priest has held chairs of philosophy in Australia, the UK, and the United States, as well as many visiting positions at universities in Europe and Asia. He is currently Distinguished Professor of Philosophy at the Graduate Center, City University of New York, and Boyce Gibson Professor Emeritus at the University of Melbourne.

Robert H. Sharf is D. H. Chen Distinguished Professor of Buddhist Studies in the Department of East Asian Languages and Cultures at the University of California, Berkeley, as well as Chair of Berkeley's Center for Buddhist Studies.
What is included with this book?