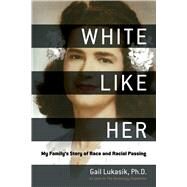 White Like Her: My Family’s Story of Race and Racial Passing is the story of Gail Lukasik’s mother’s “passing,” Gail’s struggle with the shame of her mother’s choice, and her subsequent journey of self-discovery and redemption.

In the historical context of the Jim Crow South, Gail explores her African-American mother’s decision to pass, how she hid her secret even from her own husband, and the price she paid for choosing whiteness.

Haunted by her mother’s fear and shame, Gail embarks on a quest to uncover her mother’s racial lineage, tracing her family back to eighteenth-century colonial Louisiana. In coming to terms with her decision to publicly out her mother, Gail changed how she looks at race and heritage.

With a foreword written by Kenyatta Berry, host of PBS's Genealogy Roadshow, this unique and fascinating story of coming to terms with oneself breaks down barriers.
Gail Lukasik was born in Cleveland, Ohio, and was a ballerina with the Cleveland Civic Ballet Company. She has worked as a choreographer, freelance writer, editor, and college lecturer. Recently, Gail appeared on PBS Genealogy Roadshow (St. Louis Central Public Library). She said, "I'm a mystery author who's never been able to solve my own family mystery." The show solved the mystery and revealed her mother's life-changing secret. PBS was so intrigued by her story that they invited her back to update her story. She is also the author of several mystery novels featuring the character Leigh Girard.

Kenyatta D. Berry is a genealogist, businesswoman, and lawyer with more than fifteen years experience in genealogical research and writing. She is a host of the PBS broadcast Genealogy Roadshow and is the Past President of the Association of Professional Genealogists (APG) and on the Council of the Corporation for the New England Historic Genealogical Society (NEHGS) in Boston. A frequent lecturer and writer, her area of focus is African American and Slave Ancestral research.