The Window at the White Cat 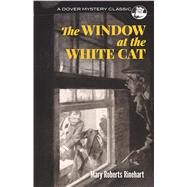 "In my criminal work, everything that wears skirts is a lady, until the law proves her otherwise," declares Jack Knox, attorney at law and narrator of this sprightly mystery. Jack's cautiously chivalrous observation is prompted by the beauty and distress of his newest client, Margery Flemming. It seems that Margery's father, a crooked politician, has been missing for over a week. Unwilling to involve the police in her father's corrupt activities, the comely young woman has selected a random lawyer for consultation—a counselor who falls in love with her at first sight and determines to prove his worth.
Jack's pursuit of the vanished politician leads to an investigation of a notorious social club known as the White Cat. While Jack bumbles his way along a trail of clues (he's comically clumsy as well as inexperienced at locating missing persons), Margery takes refuge with her elderly aunts, one of whom suddenly disappears, leaving behind only a bloody handprint. Can Jack locate Margery's missing relatives and win her affections from her increasingly suspicious-looking fiancé?
Mary Roberts Rinehart, "the American Agatha Christie," published this entertaining romp in 1910. Loaded with period charm, the briskly paced mystery combines political thrills, humor, and romance.
Known as the American Agatha Christie, Mary Roberts Rinehart (1876–1958) is reputed to have originated the expression, "the butler did it" (although she didn't). She is also credited with inventing the "Had-I-But-Known" school of mystery writing. Many of her books and plays have been adapted for movies, and her classic mystery, The Circular Staircase, plus her debut, The Man in Lower Ten, are available from Dover.
I. Sentiments and CluesII. Uneasy ApprehensionsIII. Ninety-eight PearlsIV. A Thief in the NightV. Little Miss JaneVI. A Fountain PenVII. Concerning MargeryVIII. Too LateIX. Only One Eye ClosedX. Breaking the NewsXI. A Night in the Fleming HomeXII. My CommissionXIII. Sizzling MetalXIV. A Walk in the ParkXV. Find the WomanXVI. Eleven Twenty-two AgainXVII. His Second WifeXVIII. Edith's CousinXIX. Back to BellwoodXX. Association of IdeasXXI. A Proscenium BoxXXII. In the Room Over the WayXXIII. A Box of Crown DerbyXXIV. Wardrop's StoryXXV. Measure for MeasureXXVI. Lovers and a Letter