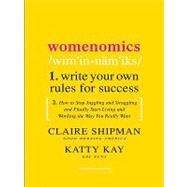 Once upon a time big bad corporations employed women because they were cheap, made good coffee, suggested diversity, and, let's face it, looked a heck of a lot better than most men. Times have changed. Forty years after professional women first stormed the corporate barricades, those same firms are looking at us and seeing dollar signs. They've discovered that women deliver profits, often in big numbers, and that we are very worth hanging on to.

This is not just wishful thinking. A whole host of business brains, from Michigan to Norway, have uncovered an "asset-to-estrogen" ratio, which suggests two things: more women at a company can mean more profit, and every company in the Western world would do well to treat their professional women properly.3 It turns out that women are incredibly valuable and inconveniently expensive to replace.

Your company needs you more than you realize and quite possibly more than you need them. The numbers we are about to give you prove that. Ready to crunch? Don't worry, we'll talk big picture; this is not an economics thesis. But these studies are so startling that we thought you could benefit from an up-close look at just how much power you have.

The wise people at Pepperdine University realized it would be a good idea to take a bit of the emotion out of the debate about whether women are useful workers and chuck in a good healthy dose of economic analysis instead. They conducted a massive nineteen-year survey of 215 Fortune 500 companies.4 The Pepperdine professors wanted to find out if companies with more women in top positions did better or worse than companies with fewer women. And, being economists, by better or worse they meant more or less profitable. This is a hard numbers game, remember. Do women help companies make money or not?

The researchers surveyed these companies every year with a complicated formula worthy of all their PhDs. They added points according to how many and how senior the women in the company were. They then took three different measures of profitability, since different industries measure their profits in different ways.

The results are little short of revolutionary. By every measure of profitability—equity, revenue, and assets—Pepperdine's study found that companies with the best records for promoting women outperform the competition.

Indeed the companies with the very best records of promoting women beat the industry average by 116 percent in terms of equity, 46 percent in terms of revenue, and 41 percent in terms of assets. We're not economists, but even we can see that, cut it whichever way you like, women are good for profits. (Indeed, the study was called "Women in the Executive Suite Correlate to High Profits.")

Professor Roy Adler, who conducted the study, believes one explanation for the high women-to-profit ratio may be that the high-performing firms do well because their top executives make smart decisions. One of those smart decisions is cranking open that heavy executive suite door to admit more women—well-educated and critical talent.

Now that, we reckon, is power in your well-manicured hand.

Still not convinced? These findings are not an aberration.

At the University of California at Davis, the graduate school of management concluded in 2005 that companies with women in top leadership positions have "stronger relationships with customers and shareholders and a more diverse and profitable business."5 The school concluded that "diversity of thought and experience in leadership is good business strategy." And that's the key—employing women is no longer a politically correct palliative to diversity. It is good business strategy.

The independent research organization Catalyst, which focuses on women in business, also conducted a study of 353 Fortune 500 companies in the late 1990s. They wanted to explore the link between gender diversity in top management teams and U.S. corporate financial performance. Catalyst, like Pepperdine, found that companies with the highest representation of women in senior management positions performed best. They had a higher return on equity and a higher total return to shareholders—higher by more than one-third.6

As journalists, when we start to read successive reports that come up with similar conclusions, we call it a story. When the results are this conclusive and this notable we may well even call it a headline.

As journalists we're also cautious. We can't say that diversity is the only reason companies with more women are doing better. Clearly there could be other reasons too. But there is indisputably a pattern here.

"Companies that recruit, retain and advance women can tap into an increasingly educated and skilled segment of the talent pool," says the Catalyst study.Let's look at that pool a bit. How much do you know about women and their talents? We were surprised.

What percentage of bachelor's degrees do women in the United States earn? 40 percent? 50 percent? No, try 57 percent. And what about the degree that really counts for professionals, the master's? Here too women are on top. Women earn 58 percent of all graduate degrees. Even in business, women are now over a third of all graduates.7

Nearly half the American workforce is female and the recession means we'll soon be a majority.8 Women in management? 46 percent. At the extreme heights, the numbers are thin but rising. Women's representation in the senior ranks of Fortune 500 companies grew from 10 percent in 1996 to 16 percent in 2002. That's more than a 50 percent increase in just six years.9

And this recognition of female business clout doesn't stop at America's shores. In Norway the government has become so convinced of the value of women in business that the minister of trade has demanded that 40 percent of any company board be women—not to appear politically correct, but to make their firms more competitive internationally.10

In Britain researchers at Cranfield University School of Management now publish an annual index they call the Female FTSE (the UK's DOW), which measures the progress of women in the country's top companies.11 They too have found that companies with women on the executive management team outperform their less diverse competitors.

Excerpted from Womenomics: Work Less, Achieve More, Live Better by Claire Shipman, Katty Kay
All rights reserved by the original copyright owners. Excerpts are provided for display purposes only and may not be reproduced, reprinted or distributed without the written permission of the publisher.