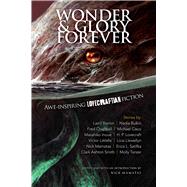 Even though he passed over 80 years ago, H. P. Lovecraft maintains a visceral influence over a host of contemporary writers. Inspired by the Master of the Macabre's more optimistic writings, this unique collection spotlights the weird works of nine current horror and fantasy authors, including the award-winning Michael Cisco and Livia Llewellyn plus Victor LaValle, Molly Tanzer, and Masahiko Inoue. Also includes Clark Ashton Smith's 1931 "The City of the Singing Flame" and Lovecraft's own "The Shadow Over Innsmouth" as well as an extensive Introduction by leading Lovecraftian scholar Nick Mamatas.

Laird Barron is the author of several books, including The Beautiful Thing That Awaits Us All,Swift to Chase, and Worse Angels. His work has also appeared in many magazines and anthologies. Barron currently resides in the Rondout Valley writing stories about the evil that men do.

Nadia Bulkin writes stories, thirteen of which appear in her debut collection, She Said Destroy (Word Horde, 2017). Her short stories have been included in editions of The Year's Best Weird Fiction, The Year's Best Horror, and The Year's Best Dark Fantasy & Horror. She has been nominated for the Shirley Jackson Award five times. She grew up in Jakarta, Indonesia with her Javanese father and American mother, before relocating to Lincoln, Nebraska. She has a B.A. in Political Science, an M.A. in International Affairs, and lives in Washington, D.C.

Fred Chappell is the award-winning author of more than twenty books of poetry and fiction, including I Am One of You Forever, Brighten the Corner Where You Are, and Look Back All the Green Valley. He has received many major prizes, including the Bollingen Prize in Poetry from Yale University and the Award in Literature from the National Institute of Arts and Letters. He lives with his wife, Susan in Greensboro, North Carolina.

Michael Cisco has published ten novels including The Divinity Student, The Great Lover, The Narrator, ANIMAL MONEY, and UNLANGUAGE, and a short story collection called Secret Hours.  His short fiction has appeared in: The Thackery T. Lambshead Pocket Guide to Eccentric and Discredited Diseases, Lovecraft Unbound, Black Wings, Blood and Other Cravings, THE WEIRD, The Grimscribe's Puppets, and Aickman's Heirs, among others.  He teaches at CUNY Hostos.

Masahiko Inoue (?? ??) was born in Tokyo in 1960. In 1983, his submission to the Hoshi Shinichi Short-Short Contest won an award for excellence and was included in the contest’s best-of anthology. Drawn to the subgenre of historical dark fantasy Ryo Hanmura helped create, Inoue’s first novel featured a young Abraham Van Helsing hunting yokai in Edo-period Nagasaki. In addition to his own prolific output as a novelist, he supervised the paperback horror anthology series Freak-Out Collection, running for almost 50 volumes from 1998, providing a place for countless emerging and established authors to unveil weird and macabre creations of their own.

Victor LaValle is the author of the short story collection Slapboxing with Jesus, four novels, The Ecstatic, Big Machine, The Devil in Silver, and The Changeling and two novellas, Lucretia and the Kroons and The Ballad of Black Tom. He is also the creator and writer of a comic book Victor LaValle's DESTROYER. He has been the recipient of numerous awards including the World Fantasy Award, British World Fantasy Award, Bram Stoker Award, Whiting Writers' Award, a Guggenheim Fellowship, Shirley Jackson Award, American Book Award, and the key to Southeast Queens. He was raised in Queens, New York. He now lives in Washington Heights with his wife and kids, and teaches at Columbia University.

Livia Llewellyn’s fiction has appeared in over forty anthologies and magazines, and reprinted in The Best Horror of the Year, Year’s Best Weird Fiction, and The Mammoth Book of Best New Erotica. Her short fiction collections Engines of Desire: Tales of Love & Other Horrors and Furnace were both nominated for the Shirley Jackson Award, and her story “One of These Nights” won the 2020 Edgar Award for Best Short Story. You can find her online at liviallewellyn.com and on Twitter and Instagram.

H. P. Lovecraft was born in 1890 in Providence, Rhode Island. He started his career writing poetry and essays, but turned to fiction in 1917 and found his niche as a writer of horror and the supernatural. Although he wasn't widely read during his lifetime, his reputation — and readership — grew quickly after his death in 1937. Often compared to Edgar Allan Poe, Lovecraft is considered to be one of the most important horror writers of the 20th century.

Nick Mamatas is an author, editor, and anthologist. His novels include the Beat Lovecraft mash-up Move Under Ground, the Lovecraftian murder mystery I Am Providence, and the speculative thriller The Second Shooter. Haunted Legends, his anthology co-edited with Ellen Datlow, won the Bram Stoker Award, and The Future is Japanese and Hanzai Japan, co-edited with Masumi Washington were both nominated for the Locus Award. His own short fiction has been published in Best American Mystery Stories, Year’s Best Science Fiction and Fantasy, and dozens of other venues. Nick’s fiction and editorial work has been variously nominated for the Hugo, World Fantasy, Shirley Jackson, and International Horror Guild awards.

Erica L. Satifka's short fiction has appeared in Clarkesworld, Shimmer, and Interzone. Her debut novel Stay Crazy won the 2017 British Fantasy Award for Best Newcomer, and her rural cyberpunk novella Busted Synapses is forthcoming from Broken Eye Books. She lives in Portland, OR with her husband Rob and several adorable talking cats.

Clark Ashton Smith was a self-educated artist, poet, and author best remembered for his short stories of fantasy, horror, and the supernatural published in genre pulp magazines such as Wonder Stories and Weird Tales in the late 1920s and 1930s. Smith died in 1961 in California.

Molly Tanzer is the author of the Diabolist’s Library trilogy: Creatures of Will and Temper, the Locus Award-nominated Creatures of Want and Ruin, and Creatures of Charm and Hunger. She is also the author of the weird western Vermilion, an io9 and NPR "Best Book" of 2015, and the British Fantasy Award-nominated collection, A Pretty Mouth, as well as many critically acclaimed short stories. Follow her adventures at @molly_tanzer on Instagram or @molly_the_tanz on Twitter. She lives outside of Boulder, CO with her cat, Toad.

Introduction
"The Shadow Over Innsmouth" by H.P. Lovecraft
"Ghost Story" by Victor LaValle
"Vastation" by Laird Barron
"Translation" by Michel Cisco
"Seven Minutes in Heaven" by Nadia Bulkin
"You Will Never Be the Same" by Erica Satifka
"Bright Crown of Joy" by Livia Llewellyn
"Go, Go, Go, Said the Byakee" by Molly Tanzer
"Night Voices, Night Journeys" by Masahiko Inoue, translated by Edward Lipsett
"Weird Tales" by Fred Chappelle
"The City of the Singing Flame" by Clark Ashton Smith
What is included with this book?