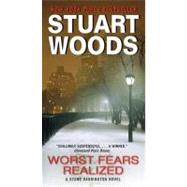 Not a man to dwell on the past, Stone Barrington has no choice but to rattle old skeletons when the people closest to him start dying, and he has little to go on but the suspicion that the killer might be someone he once knew. The trip down memory lane isn't all bad though, for it reunites Stone with his ex-partner, Dino Bacchetti, now head of detectives in the nineteenth precinct.Trying to find a brilliant killer in a sea of old faces is difficult enough without Stone's former love, Arrington, now Mrs. Vance Calder, resurfacing too-especially when she sets off her own fireworks coming nose to nose with his latest flame, a Mafia princess as beautiful as she is dangerous.Caught on a thrill ride of a case that tests him as none has ever done before, Stone races to find a twisted madman with a taste for blood vengeance, with only a prayer to find him before Stone's worst fears are realized.
Worst Fears Realized

The pain lay buried somewhere in the depths of Stone Barrington's upper body; a cross between a slipped disc and a coronary, it seemed. It had begun after a phone conversation early in the previous winter. The call, from Arrington Carter, had ended everything. Now she was the wife of another man, living in his house, rearing his son. He would never see her again, except in her husband's company, and he would never think of her again without feeling the pain.

He had never believed it would persist into the following spring, but it had. If anything, it was worse. He saw Dino a couple of times a week, always at Elaine's. Dino was his closest friend—sometimes, he felt, his only friend. Not true, of course. Elaine was his friend, and the evenings in her restaurant, with Elaine and Dino, were the only bright spots in his week. His law practice had lately been boring, a personal injury suit that dragged on and on, a bone thrown to him by Woodman & Weld, because there wasn't enough meat on it to nourish a firm with thirty partners and a hundred associates. They were ready to go to trial, and the expected settlement offer had not materialized. It was depressing. Everything was depressing. And the pain continued, assuaged only by bourbon, and he had done too much assuaging lately. He sat at table number five, at Elaine's, with Dino, and ordered another assuagement.

"I don't feel like going to a party with a lot of cops," Stone said.

"You don't know anybody but cops," Stone said.

Dino caught the waiter's eye and signaled for a check. "I know lots of people," he said.

"It's not a Mafia party, either," Dino said, dodging the question.

"Whose party is it?"

"Oh. Then we get to bring our own booze."

"Isn't he handling the Dante trial?" Dante was a crime boss, and his trial was the most important since Gotti's.

"He got a conviction this afternoon."

"Don't you watch the news anymore?"

"The party is to celebrate the conviction."

"How come I don't know Brougham?"

"Because he runs with a classier crowd than you're accustomed to. The only seedy lawyers he meets are in court."

"Who are you calling a seedy lawyer?"

"How many lawyers are at this table?"

"I am not a seedy lawyer; I just take seedy cases. There's a difference."

"Whatever you say," Dino said, standing up and reaching for his raincoat. "Let's get out of here."

"I don't want to," Stone grumbled.

"You don't want to do anything, you desolate fuck, and I can't stand it anymore. Now put your coat on and come with me, or I'll just shoot you here and now. Nobody would ever prosecute me; it would be justifiable homicide."

"Oh, all right," Stone said, struggling to his feet and grabbing his coat. "One drink, if the guy serves decent booze. Then I'm out of there."

The apartment was a duplex in the East Sixties, definitely not the preserve of an assistant DA.

"You're right," Stone said, as they handed their coats to a maid. "He's got money. There's at least a million dollars of art hanging in this room."

"What are you, his insurance agent?" Dino whispered. "Try and have a good time, okay?"

"Tell me more about this guy," Stone said.

"Word is, he's up for chief deputy DA, and he's going to run for DA, if the old man ever retires."

A handsome man of about forty spotted Dino and came across the room, towing a tall blond woman in a Chanel suit.

"Dino," he said, shaking hands. "I'm glad you could make it. You remember Dana."

The woman shook Dino's hand. "Who's this?" she asked, turning her gaze on Stone.

"This is Stone Barrington, Dana. Stone, this is Martin and Dana Brougham."

"How do you do?" Stone said mechanically, shaking their hands.

"I've heard of you," Brougham said, steering Stone and Dino toward the bar. "You were Dino's partner at the Nineteenth Precinct a while back, weren't you?"

"A while back," Stone echoed. "After I left the force they had to kick him upstairs; nobody else would ride in the same car with him."

"You're over at Woodman and Weld, aren't you?"

"I'm of counsel, to them," Stone replied, "but Woodman and Weld would probably rather you didn't know it." It was a remark he wouldn't have made if he had been entirely sober.

Brougham laughed. "What are you drinking?"

"Wild Turkey on the rocks, if you have it."

Brougham grabbed a bottle that looked like a crystal decanter and poured Stone a double. "This is Wild Turkey, but it's got a leg up on the standard stuff."

Stone tasted the whiskey. The man was right. This stuff cost thirty bucks a bottle; he was beginning to like Brougham.

A couple arrived at the front door, and Brougham went off to greet them. "Wander around," he said. "Meet some people."

Stone looked around. The room was jammed with people, and somebody was playing the piano rather well. "I see at least four cops," he said to Dino.

"So what? There are a lot of civilians here, too."

"If you consider assistant DA's civilians. Who's the tall guy by the fireplace?"

"Have you ever even met him?"

"What the hell is the matter with you lately?"

Excerpted from Worst Fears Realized by Stuart Woods
All rights reserved by the original copyright owners. Excerpts are provided for display purposes only and may not be reproduced, reprinted or distributed without the written permission of the publisher.