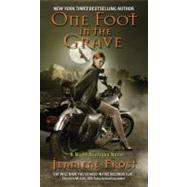 You can run from the grave, but you can't hide . . . Half-vampire Cat Crawfield is now Special Agent Cat Crawfield, working for the government to rid the world of the rogue undead. She's still using everything Bones, her sexy and dangerous ex, taught her, but when Cat is targeted for assassination, the only man who can help her is the vampire she left behind. Being around him awakens all her emotions, from the adrenaline kick of slaying vamps side by side to the reckless passion that consumed them. But a price on her head-wanted: dead or half-alive-means her survival depends on teaming up with Bones. And no matter how hard she tries to keep things professional between them, she'll find that desire lasts forever . . . and that Bones won't let her get away again.
One Foot in the Grave
A Night Huntress Novel

I waited outside the large, four-story home in Manhasset that was owned by a Mr. Liam Flannery. This wasn't a social call, as anyone looking at me could tell. The long jacket I wore was open, leaving my gun and shoulder holster clearly visible, as was my FBI badge. My pants were loose-fitting and so was my blouse, to hide the twenty pounds of silver weapons strapped to my arms and legs.

My knock was answered by an older man in a business suit. "Special Agent Catrina Arthur," I said. "Here to see Mr. Flannery."

Catrina wasn't my real name, but it's what was on my doctored badge. The doorman gave me an insincere smile.

I already knew Liam Flannery was in. What I also knew was that Mr. Flannery wasn't human, and neither was the doorman.

Well, neither was I, even though I was the only one out of the three of us with a heartbeat.

A few minutes later, the door reopened. "Mr. Flannery has agreed to see you."

That was his first mistake. If I had anything to say about it, it would also be his last.

My first thought as I entered Liam Flannery's house was, Wow. Hand-carved wood adorned all the walls, the floor was some kind of really expensive-looking marble, and antiques were tastefully littered everywhere the eye could see. Being dead sure didn't mean you couldn't live it up.

The hairs on the back of my neck stood on end as power filled the room. Flannery wouldn't know I could feel it, just like I'd felt it from his ghoul doorman. I might look as average as the next person, but I had a few secrets up my sleeve. And lots of knives, of course.

"Agent Arthur," Flannery said. "This must be about my two employees, but I've already been questioned by the police."

His accent was English, which was at odds with his Irish name. Just hearing that intonation made a shiver run up my spine. English accents held memories for me.

I turned around. Flannery looked even better than the picture in his FBI file. His pale crystal flesh almost shimmered against the tan color of his shirt. I'll say one thing for vampires—they all had gorgeous skin. Liam's eyes were a clear turquoise, and his chestnut hair fell past his collar.

Yep, he was pretty. He probably had no trouble scaring up dinner. But the most impressive thing about him was his aura. It flowed off him in tingling, power-filled waves. A Master vampire without a doubt.

"Yes, this is about Thomas Stillwell and Jerome Hawthorn. The Bureau would appreciate your cooperation."

My polite stalling was to gauge how many other people were in the house. I strained my ears, but so far came up with no one but Flannery, the ghoul doorman, and myself.

"Of course. Anything to assist law and order," he said with an undercurrent of amusement.

"And you're comfortable speaking here?" I asked, trying to get more of a look around. "Or is there somewhere private you'd prefer?"

He sauntered over. "Agent Arthur, if you want to have a private word with me, call me Liam. And I do hope you want to talk about something other than boring Jerome and Thomas."

Oh, I had little intention of talking as soon as I got Liam in private. Since he'd been implicated in the deaths of his employees, Flannery had made my to-do list, though I wasn't here to arrest him. The average person didn't believe in vampires or ghouls, so there wasn't a legal process for dealing with murdering ones. No, there was a covert branch of Homeland Security instead, and my boss, Don, would send me. There were rumors about me in the undead world, true. Ones that had grown during my tenure at this job, but only one vampire knew who I really was. And I hadn't seen him in over four years.

"Liam, you're not flirting with a federal agent who's investigating you in a double homicide, are you?"

"Catrina, an innocent man doesn't fret over the wheels of law whenever they rumble in the distance. At least I commend the feds on sending you to speak with me, beautiful woman that you are. You also look a bit familiar, though I'm sure I would have remembered meeting you before."

"You haven't," I said immediately. "Trust me, I would have remembered."

I didn't mean it as a compliment, but it caused him to chuckle in a way that was too insinuating for my liking.

You smug son of a bitch. Let's see how long you'll keep that smirk.

"Back to business, Liam. Are we talking here, or somewhere private?"

He made a noise of defeat. "If you insist on traveling this path, we may as well be comfortable in the library. Come with me."

I followed him past more lavish, empty rooms to the library. It was magnificent, with hundreds of new and old books. There were even scrolls preserved in a glass display case, but it was the large piece of artwork on the wall that caught my attention.

At first glance it appeared to be wood or ivory, but on closer inspection, it looked like bones. Human ones.

"Aborigine, nearly three hundred years old. Given to me by some mates of mine in Australia."

"Yes. This should be wrapped up in thirty minutes."

One Foot in the Grave
A Night Huntress Novel. Copyright © by Jeaniene Frost. Reprinted by permission of HarperCollins Publishers, Inc. All rights reserved. Available now wherever books are sold.

Excerpted from One Foot in the Grave by Jeaniene Frost
All rights reserved by the original copyright owners. Excerpts are provided for display purposes only and may not be reproduced, reprinted or distributed without the written permission of the publisher.