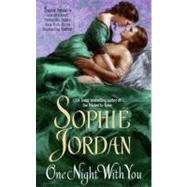 Anything can happen after dark, as Lady Jane Guthire finds out after she escapes to a scandalous courtesans masquerade ball, in this unconventional Regency-set romance from the "USA Today" bestselling author of "Too Wicked to Tame." Original.
One Night With You

Lady Jane Guthrie stared out her bedchamber window, her gaze following a lone carriage as it rattled down the dark and silent street. A great lumbering beast, it crawled through the night fog, its inhabitants unknown, its destination unknown, yet she wished she were aboard it, sheltered within its depths.

The evening wind tossed the curtains at the carriage window in a taunting farewell. She splayed her hand over the glass, cool and lifeless against her palm, watching as the carriage turned the square and disappeared from sight. Her stomach churned as the fading clatter of hooves echoed dully in the night.

Gradually, she exerted more pressure, pressing harder, as if she could break through the glass and transport herself away, outside—far from Desmond and Chloris and her three fractious nieces who delighted in heaping abuse upon her.

A shaky laugh spilled from her lips, filling the silence. Unreasonable expectations. A year well past mourning yet here she was, a glorified servant in the home she had once managed.

The door opened behind her with a soft creak. She jerked back from the window and spun around, fearing her thoughts had conjured forth demons to stop her night's plans, to put her in place—in her cage. Her pulse beat furiously at her throat and her hand flew to her neck as if she might still the clamoring beat.

Anna stepped inside the room, her middle-aged face wreathed in a broad smile. Jane dropped her hand and drew a calming breath, the thud of her heart quieting in her ears.

"Mr. Billings has left for his club and Mrs. Billings retired to her rooms for the evening." Anna paused, her great bosom lifting with excited breath. "It's time."

Jane nodded, her heart loosening inside her chest with the knowledge that Desmond had gone, that the same roof did not cover their heads. No risk of running into him in the corridor, of suffering his lecherous, insolent stare.

Nothing would stop her. Nothing barred her from seizing an evening out, a night of freedom. Tonight belonged to her. Even if the rest of her life did not.

Jane pressed a hand to her stomach to still the dance of butterflies there. "Heavens," she breathed, "you would think I've never attended a ball before."

"Well. It has been an age," Anna rejoined with a wry twist to her lips.

Jane turned to the cheval mirror to inspect her appearance one final time. The pale blue gown had been buried in the back of her wardrobe behind all the mourning rags. She hardly recognized herself in anything save dismal black crepe and paramatta.

"It's good to see you in color again." Anna stroked her chin thoughtfully. "But something is missing."

Jane lifted an eyebrow in question.

Anna opened a small lacquered chest sitting on top of Jane's dressing table. Few items filled it. Her husband had not been one to lavish her with jewelry. At least not for her.

She possessed only one item of value. This, Anna pulled from a black velvet pouch, the stones sparkling as though lit from a light within. "Here you are."

Jane brushed her fingers over the necklace, smiling in fond memory at the grandmother who had left it to her. Her fingers caressed the lustrous stones. If possible, they seemed brighter than she recalled. The canary diamonds felt warm, almost electric. Their age-worn surface glided seductively against her palm and the gold chain winked in the light. As a girl, she had believed any woman wearing it could only look beautiful.

"Very well." Turning, she lifted her hair, the tendrils silky smooth. Anna had pulled back the heavy mass with two jet-studded combs and arranged it to trail down her back. Usually coarse as a horse's mane and wound tightly into a knot, her hair felt like it belonged to another woman.

"There now." Her maid stepped back to survey her handiwork. "You don't look the crow anymore."

Jane eyed herself in the mirror, stroking the diamonds weighing heavily at her throat. Her fingers moved from the necklace to the blue sleeve of her dress, rubbing the satin between her fingers. "For one night at least."

Jane forced herself to nod. Desmond's leering face flashed across her mind and her stomach dipped. If her brother-in-law had his way, she would never wear color again, nor would she rejoin Society.

A deep sigh welled up from her chest. One year, four months, and ten days had passed since Marcus's death, but Desmond remained as determined as ever to sequester her from Society, to keep her dancing attendance to the demanding needs of his daughters . . . and staring at her with what she had come to consider the look.

The look reminded her of a gorilla she'd once seen at a zoological exhibition. The beast had swayed behind its bars, his eyes liquid pools of yearning, eager to break loose and devour her.

Anna interrupted her musings. "Come now. Your friends are waiting, and you've an evening of dancing ahead."

Dancing. Jane wondered if she remembered how. She had not been much of a dancer when Marcus lived, spending most of her time on the edge of ballrooms with dowagers long resigned to each other, and matrons preferring each other to the husbands they suffered at home.

Shaking off the cheerless realization that her state of widowhood had not greatly altered her social patterns, she moved to the door, determined to thwart her insufferable relations if only in this small act. Tonight was not about dancing or leisure entertainments. Tonight was an exercise in rebellion. To prove, if only to herself, that she was no one's prisoner, that she alone controlled her life.

"Do try and enjoy yourself. Forget about those little monsters down the hall." Anna settled Jane's cloak about her, giving her shoulder an encouraging squeeze. "You deserve some happiness."

One Night With You. Copyright © by Sophie Jordan. Reprinted by permission of HarperCollins Publishers, Inc. All rights reserved. Available now wherever books are sold.

Excerpted from One Night with You by Sophie Jordan
All rights reserved by the original copyright owners. Excerpts are provided for display purposes only and may not be reproduced, reprinted or distributed without the written permission of the publisher.