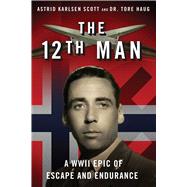 A stunning story of heroism and survival during World War II. The book that inspired the international film of the same name. “A must-read …. Intrigue, suspense, and adventure."—The Norwegian American

"I remember reading We Die Alone in 1970 and I could never forget it. Then when we went to Norway to do a docudrama, people told us again and again that certain parts were pure fiction. Since I was a Norwegian that was not good enough; I had to find the truth. I sincerely believe we did,” writes author Astrid Karlsen Scott.

The 12th Man is the true story of Jan Baalsrud, whose struggle to escape the Gestapo and survive in Nazi-occupied Norway has inspired the international film of the same name. In late March 1943, in the midst of WWII, four Norwegian saboteurs arrived in northern Norway on a fishing cutter and set anchor in Toftefjord to establish a base for their operations. However, they were betrayed, and a German boat attacked the cutter, creating a battlefield and spiraling Jan Baalsrud into the adventure of his life.

The only survivor and wounded, Baalsrud begins a perilous journey to freedom, swimming icy fjords, climbing snow-covered peaks, enduring snowstorms, and getting caught in a monstrous avalanche. Suffering from snow blindness and frostbite, more than sixty people of the Troms District risk their lives to help Baalsrud to freedom. Meticulously researched for more than five years,

Karlsen Scott and Haug bring forth the truth behind this captivating, edge-of-your-seat, real-life survival story.
Astrid Karlsen Scott first became acquainted with Jan Baalsrud’s story in 1970. In 1997, she began serious investigation of the details of the story. Scott has returned to Norway eight times in a period of three years in her efforts to find the truth. She met Dr. Tore Haug in 1997; they decided to combine their work and made many joint and separate trips to the Troms District to research this book. To gain a complete understanding of this magnificent drama, the coauthors explored the sites where the events took place, hiking up mountains and examining landmarks. Scott and Dr. Haug also met and interviewed all the survivors who helped Jan or who were indirectly involved and had knowledge of his story. Astrid, a native of Norway, is internationally known for her books on Norwegian culture. Her award-winning video, Christmas in Norway, has been shown on television in the United States and in Europe. She is also president of Nordic Adventure, a company dedicated to the promotion of Norwegian culture. She and her husband, Melvin McCabe Scott, Jr., live in Olympia, Washington. They have three children and thirteen grandchildren.

Dr. Tore Haug is a second cousin of Jan Baalsrud. He has been fascinated with Baalsrud's escape story since meeting Jan once as a boy in 1956. In 1995, after much research, he traveled with his family to the Troms District in northern Norway to further investigate Jan’s story. He found many people whose efforts on Jan’s behalf had not been acknowledged in previous accounts. Dr. Haug wanted to accurately tell the entire story of Jan and his incredible escape from the Gestapo, and of the undaunted courage of his many benefactors. Today, he is the person who knows the story better than anyone else in Norway. Haug is an M.D., a specialized general practitioner with a private practice in Norway. He studied and received his medical degree from Johannes Gutenberg University in Mainz, Germany. He has practiced medicine in Germany and Norway, and is fluent in German, Norwegian, and English. In 1976, Dr. Haug obtained his professional pilot’s license in the United States and Norway and flew as an executive pilot for five years. He and his wife, Wenche, live in Jessheim, Norway, with their daughter, Carolin.
What is included with this book?